In Angest you immerse yourself as Valentina, a cosmonaut aboard a ship in the company of Konstantin, the AI that oversees and takes care of you while doing daily tasks for your mission. But as the days go by, your perception of reality can be affected. Do you embrace it? Break free? Or find an answer somewhere else?
My responsibilities as senior game designer were:
- Developing the game concept with the creative director.
- Being temporary creative director, once the former left and before the lead designer joined.
- Designing core mechanics and systems to communicate the game concept.
- Researching to enrich game content and representations.
- Being temporary art director, once the former left and before the animator assumed.
- Documenting and keeping the Confluence pages up to date.
- Prototyping in Unity for game mechanics.
- Prototyping using Twine and RPG storytelling for events and narrative.
- Designing game features and custom tools, to allow scripting the events and game flow.
- Designing and following up implementation of features with engineering and art teams.
- Planning and building the level design, from paper and moodboards to implementation in Unity.
- Gray-boxing with ProBuilder for the art team to create assets and tech artists set the right mood.
- Following up tech art team to ensure every detail was in the right place, polishing the experience.
- Scripting the game events and flow of the game with PlayMaker, paired with custom tools.
- Coordinating and developing the story with outsourced writers.
- Developing game content to enhance the storytelling.
- Redesigning the game, reducing the scope allowing delivery of a remarkable experience.
- Mentoring co-workers from different areas such as game design, UI/UX, QA and tech art.
Developed by: Black River Studios, 2017
Platform: Samsung Gear VR
Tech Environment: Unity, PlayMaker, ProBuilder, Custom tools, Confluence, Git, Twine, Illustrator, Photoshop, Reaper
Angest was the most appraised game at SBGames 2017, one of the most important Brazilian game conferences, being awarded the Best VR Game and Best Storytelling, and nominated for Best Game, Best Visual Art, Best Technology and Best Audio.
The game is a first person adventure exclusively for Gear VR, telling the story and routine of Valentina Shestova, as a homage to Valentina Tereshkova, the first woman cosmonaut to go to outerspace in the year of 1963, and Lev Shestov, an existentialist philosopher.

Angest was conceived under three pillars: physical interactions in VR, responsive world and emotional narrative. Those pillars were defined based on Black River's creative goals and the pursuit for technical innovation as a content creator for Samsung.
Physical interactions in VR helped defining the game mechanics, which consisted in interacting with objects, by picking them up for close inspection, using and throwing, buttons, levers and cranks. All those interactions were mediated by the avatar's hand, indicating when an action was available. The hand was a key element to increase the sense of presence, providing an embodied experience for the player.
However, since Gear VR does not feature hand controllers with full tracking, some adaptations had to be made. Interacting with Konstantin terminals is a good example, since it's possible to select a line either by executing the action mechanic while looking at a sentence, or the corresponding button. In both cases the hand hovers over the terminal button, mimicking the life experience of focusing at something and guiding the hand somewhere else.
The game is rich in details to convey a responsive world. The AI Konstantin constantly tries to monitor Valentina's actions, which can be eerie and unsettling, but the are some blind spots the player can use to bypass him. The state of the world is persistent, for example not taking good care of the food plantation at the Aeroponics leads to bad crop in the following days. Actions of obedience, revolt, or attempts to escape are taken into account when reaching the end of the story.
The emotional narrative started being developed with the concept of Konstantin and Valentina's relationship, in which he keeps her in a routine, preventing the fulfillment of the space mission fearing of being left with an empty nest. It evoked emotions from Samuel Beckett's play Waiting for Godot, that has an ever unreachable resolution, promoting a reflection on the absurd of the situation. 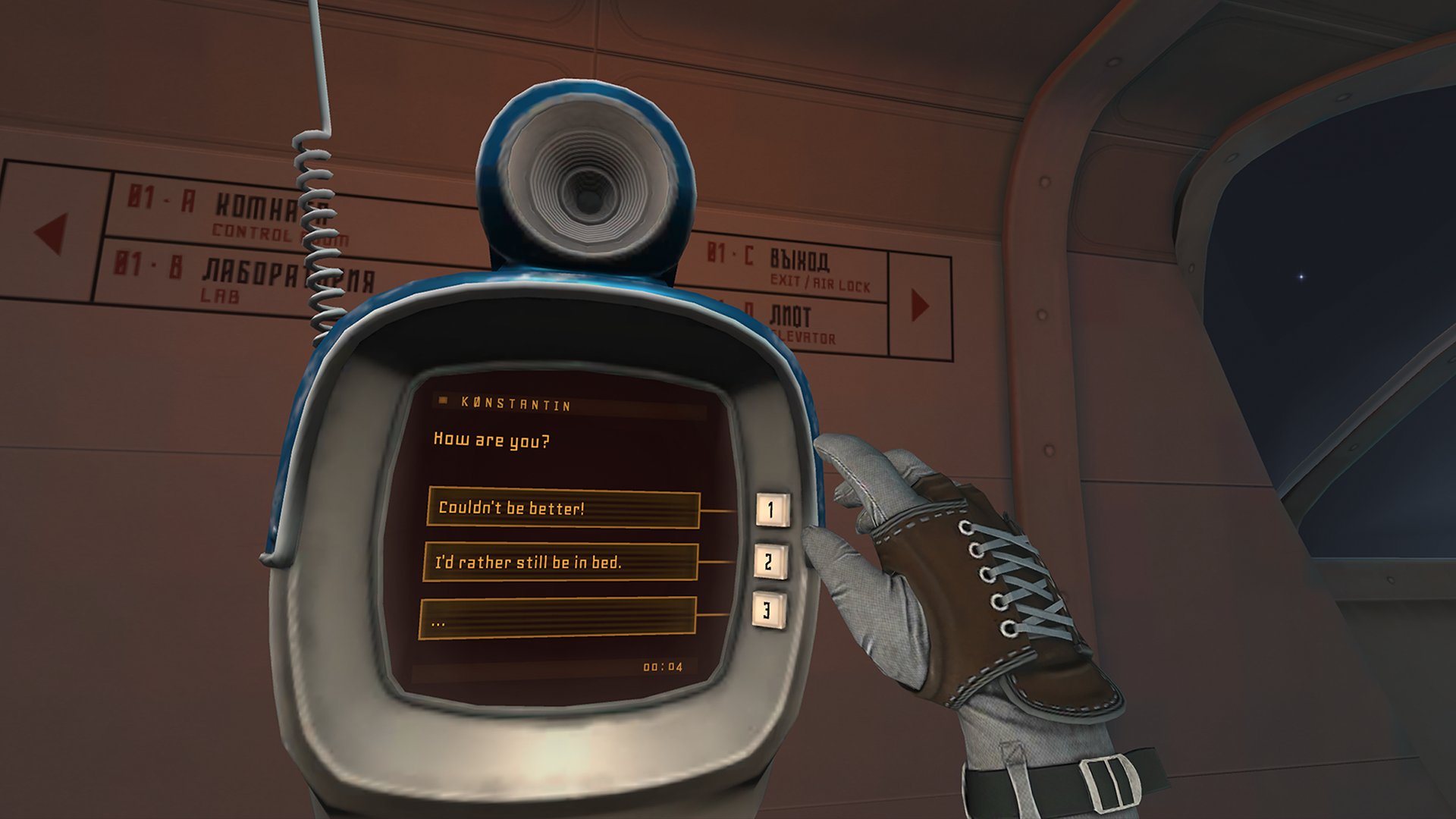 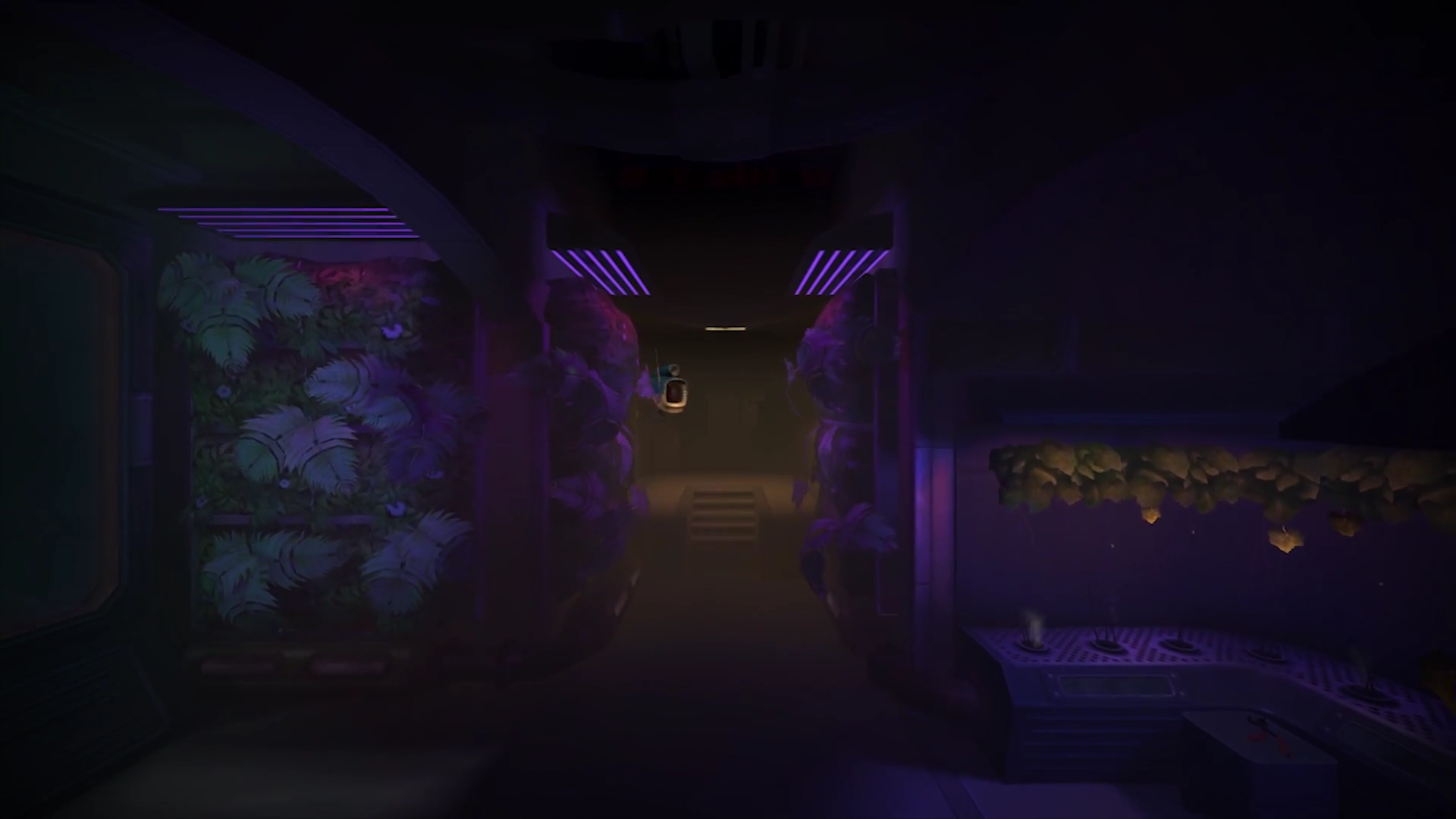 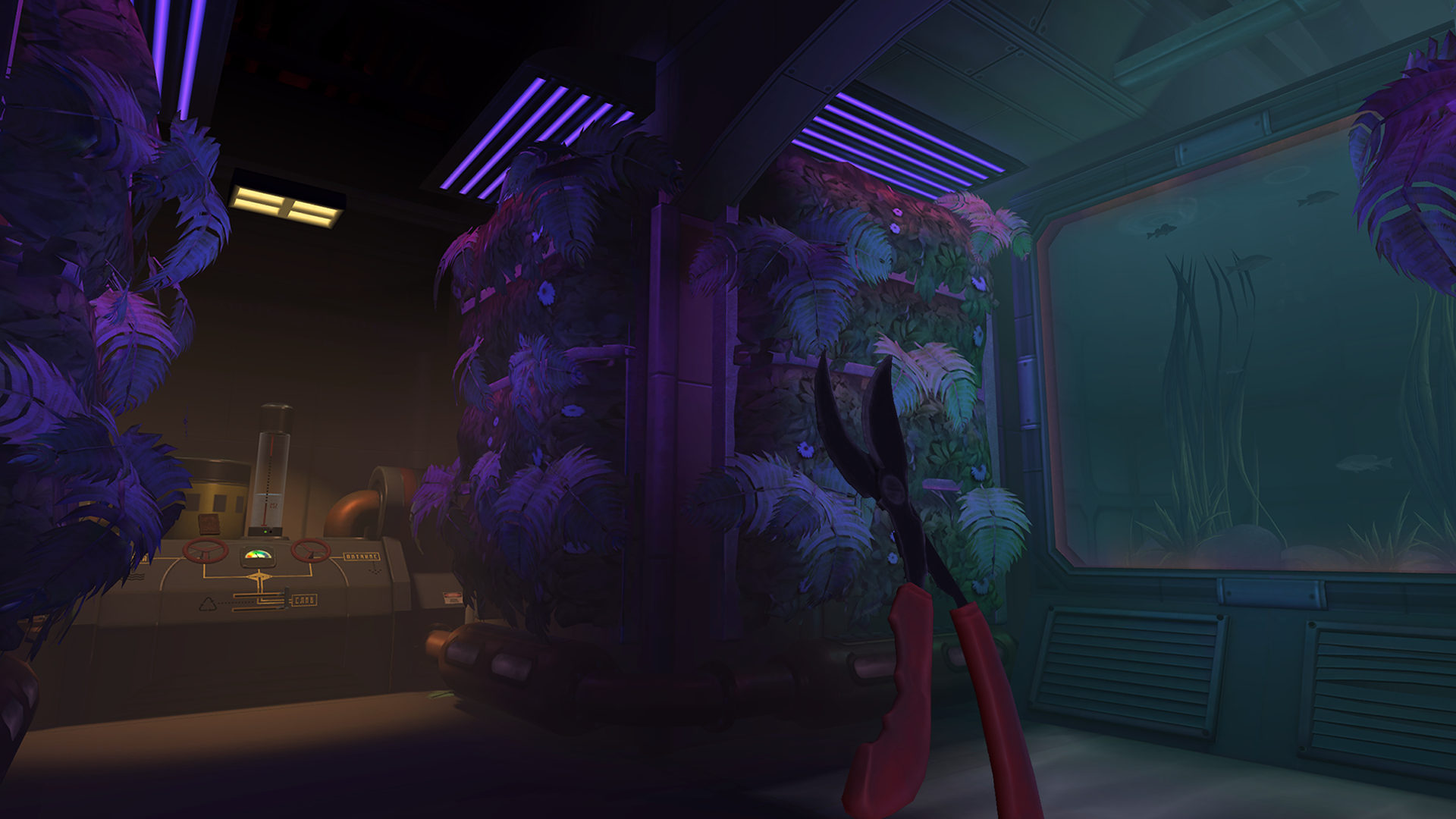 Due to a series of problems regarding team composition and shifting priorities from upper management, the project was compromised several times. That was the case when the art started derailing from the concept of 60's Russian retrofuturism due to the lack of an art director.
To prevent the game from having an art style that wouldn't match the concept, I assumed the art direction temporarily. During that time, I greatly expanded the imagetic research and guided the team of 8 artists to embrace the game concept. Since I was the only game designer assigned to the project and also responsible for the creative direction, this workflow became the project bottleneck.
Fortunately I could count with one of the animators in this endeavor and eventually delegated to him, with the approval of the producers, the role of art direciton. At the same period, a lead designer with whom I already had a quite efficient dynamic from previous experiences, joined the team and assumed the creative direction, allowing the project to move forward without overloading. 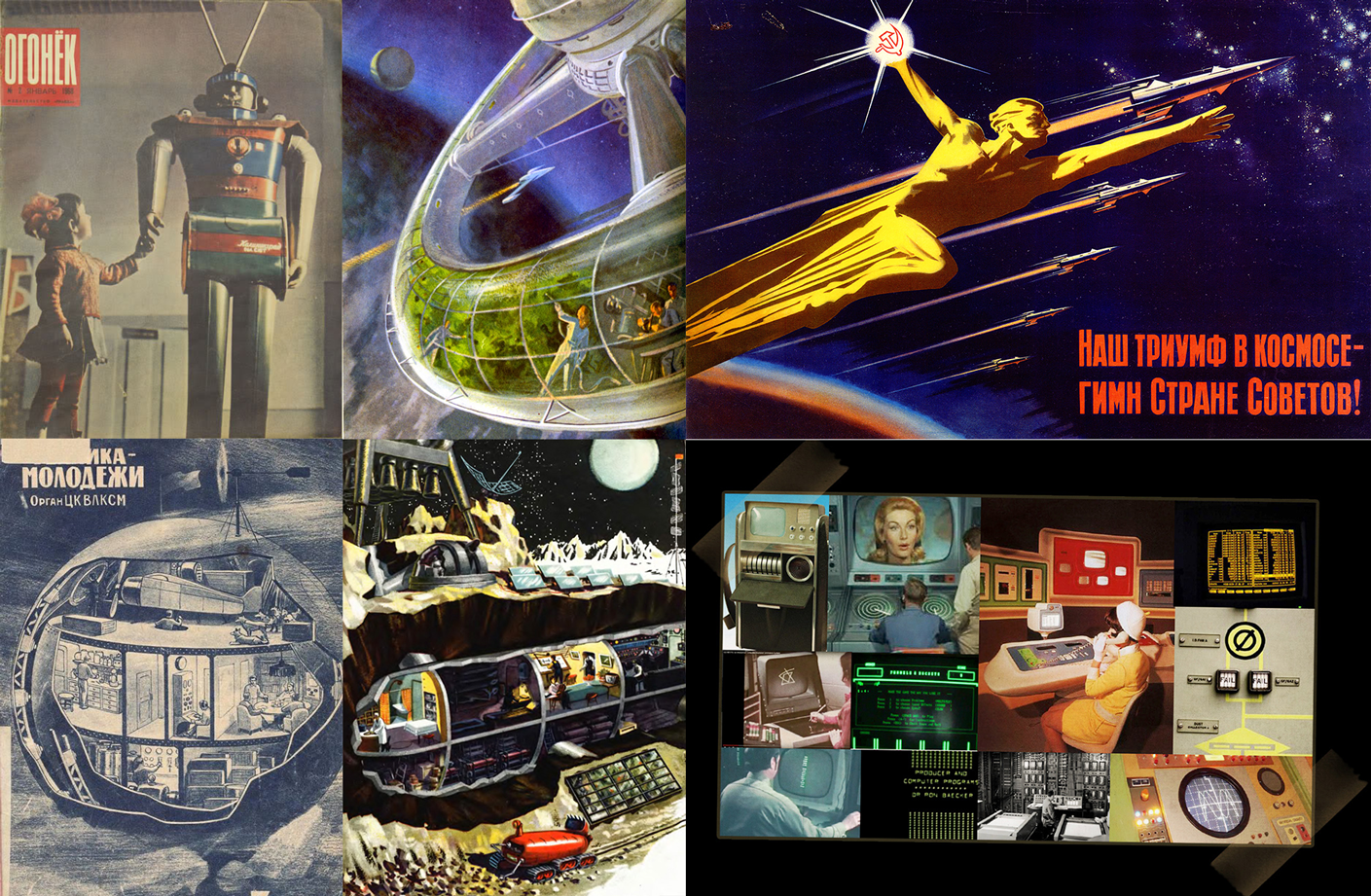 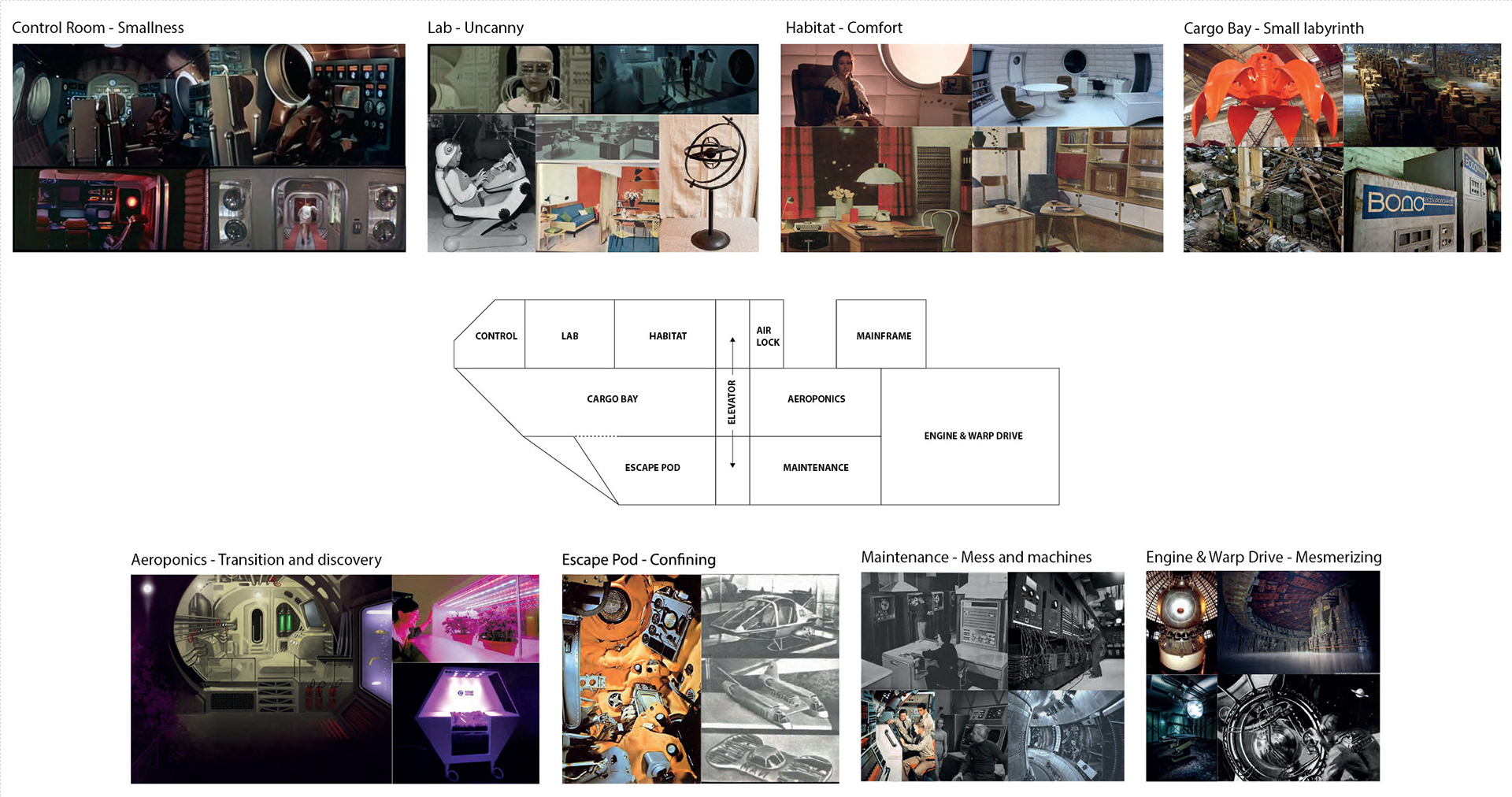 Because of the problems faced during production, the game had to suffer several cuts and the design team decided it was an opportunity, instead of a loss. The game went through a thorough redesigning, focusing on emotional narrative as the sole game pillar, cutting the priority of the other two. Physical interactions in VR and responsive world were still present in the game, but they would only be attended if to contribute with the emotional narrative. Since we committed to have a single pillar, other references were introduced to allow us to have the most of it. For that we relied on a strong and distinct style and language, introducing symbolic dream sequences to blend the borders of reality and the uncanny.
Careful examination of the narrative lead to realize it was leaning towards a story fitting the Absurdism. Embracing this concept was a crucial aspect that helped adapting the existing content into a compelling story. This served as a background theme that was ever present, as an unsettling aspect that kept instigating the player. We also cut the possible endings from seven to four, being the three main related to Passion, Revolt and Freedom, which are the solutions for the dilemma of the absurd from Albert Camus' The Myth of Sisyphus, and a hidden one of Suicide, which not only is not incentivized by the game but also according to Camus is not a solution to the absurd.
Before the redesign there were many mechanics and possible interactions, events and rooms to visit, which were not particularly inducing of a routine sensation. Cutting mechanics and many events that used to be available favored our objectives, being easier to instill the dreads of routine as a metaphor for the burden of Sisyphus. The new scope greatly reduced production cost, allowing to deliver a product of higher quality within the deadline. 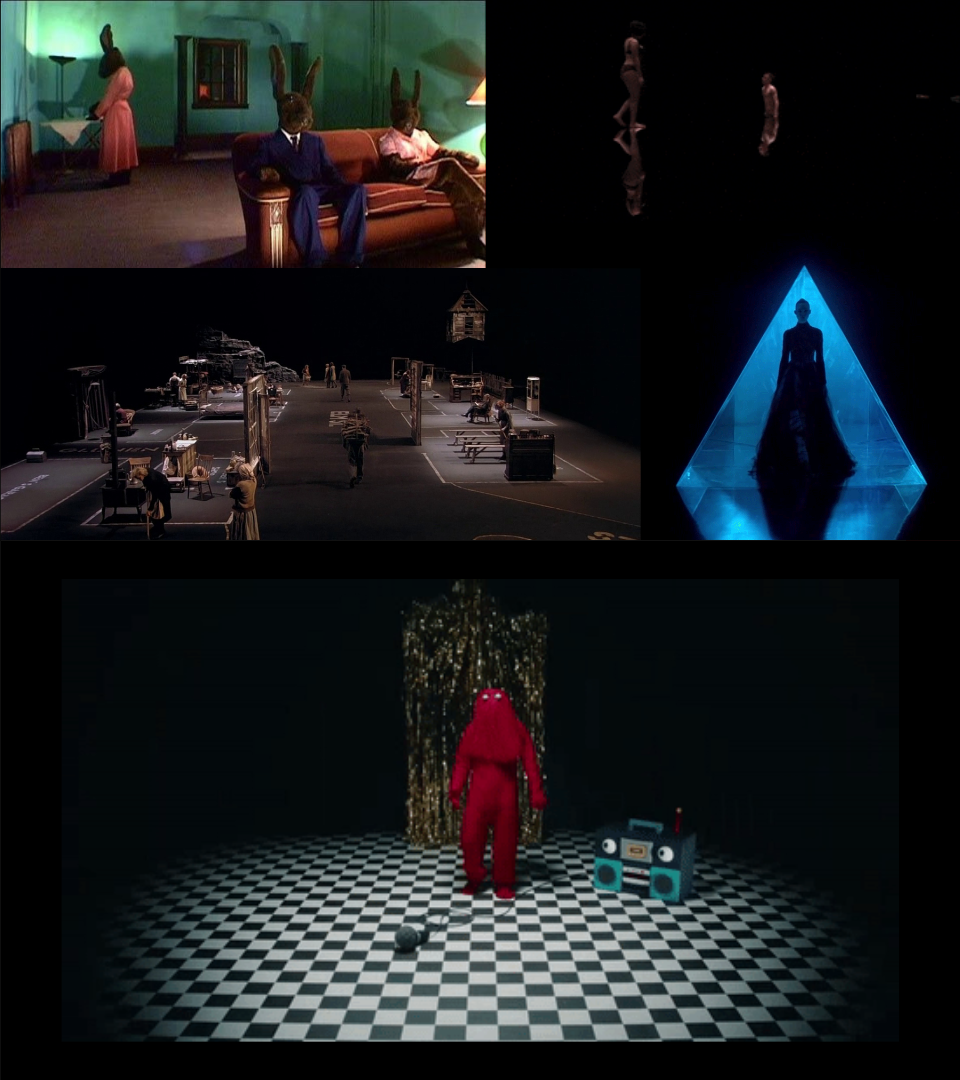 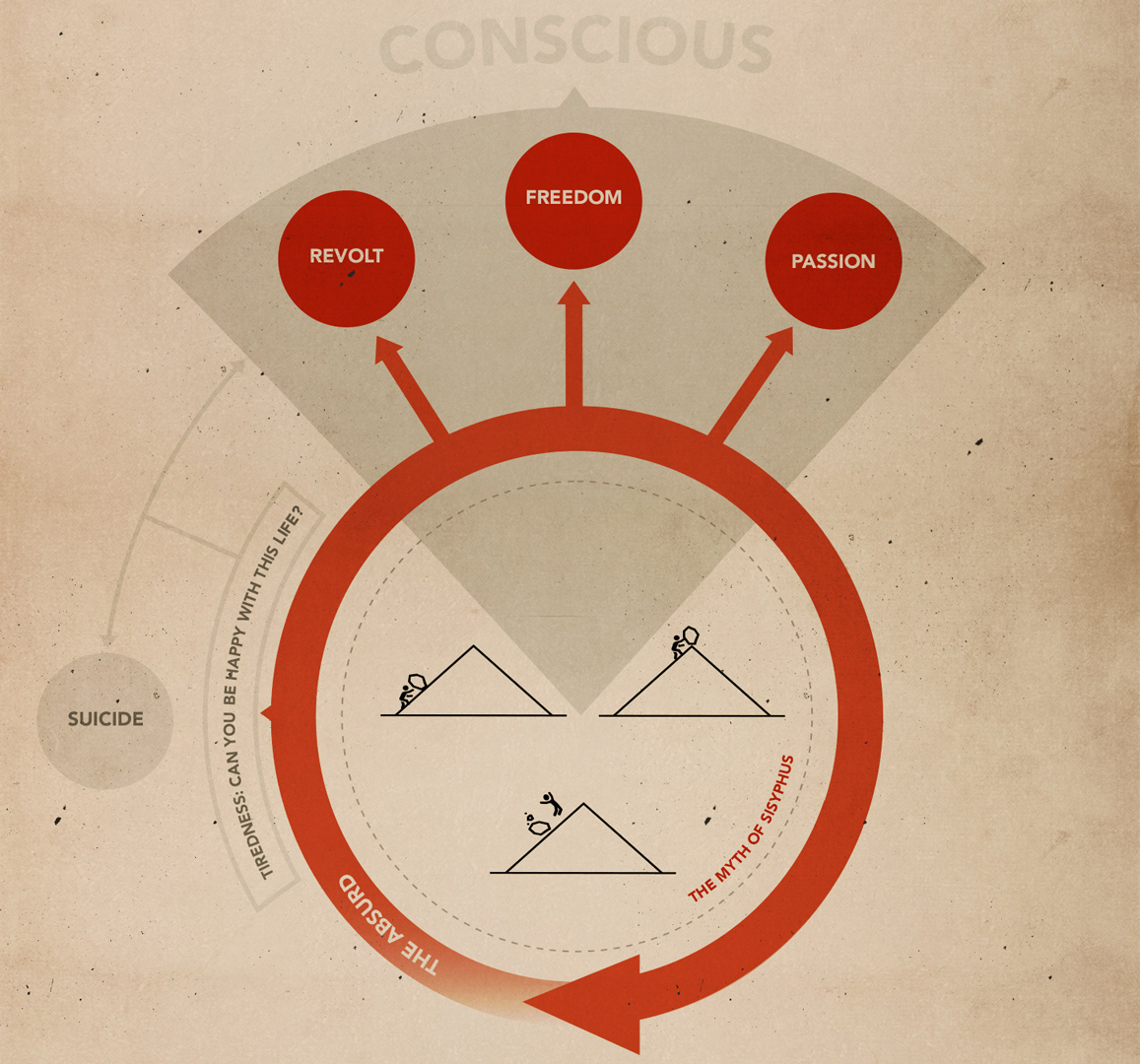 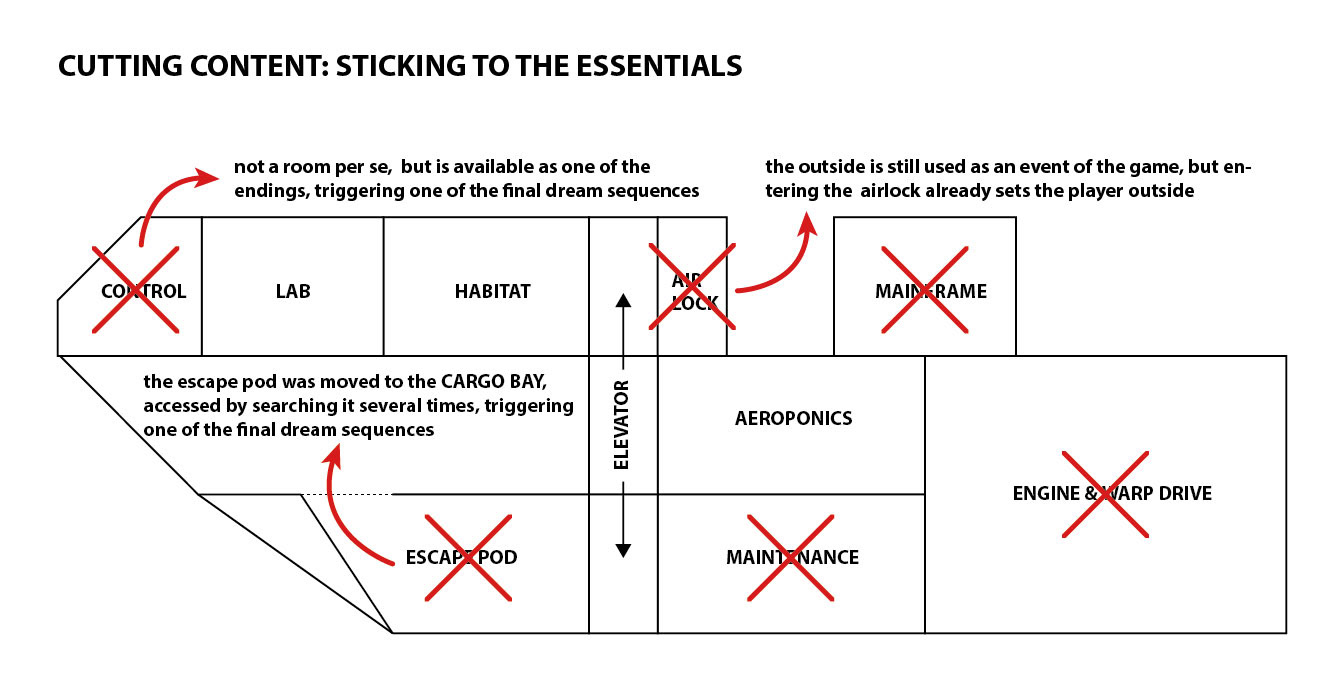 Angest operates mostly by take and event systems, controlled by PlayMaker custom actions that I designed and implemented by the engineering team. More details about those systems, from an engineering perspective, can be found on the featured Gamasutra article How we manage scenes and takes on Angest for GearVR written by the lead engineer. The take system reduced the amount of scenes needed, as each room was a scene with several takes inside, and allowed the design team to divide the story in beats and tailor the intended experience for each of them. We could, for example, add details such as starting a take with the player looking at a specific direction, or with a tool in hand to indicate loss of time.
The event system gave the design team the freedom to create events by name and assign states to them. Through PlayMaker actions it was possible to change and compare those states. This seemingly simple feature was a powerful tool that allowed to script the whole game swiftly, which contributed to iteration, since changes were easy to make.
The ProBuilder Unity plugin was reintegrated into Black River's production pipeline, which allowed the level design iterations to flow smooth. From the level design plans and schematics, it was easy to gray-box the whole spaceship, ensuring each room had the right size and position, giving a sense that all spaces were connected, as well as starting to script events to test the experience.
This pipeline also helped the art team to develop assets in the right proportions for the game world, avoiding mismatches when inside the VR environment, and to take care of fine details alongside the tech art team, when adjusting the right mood for each situation. 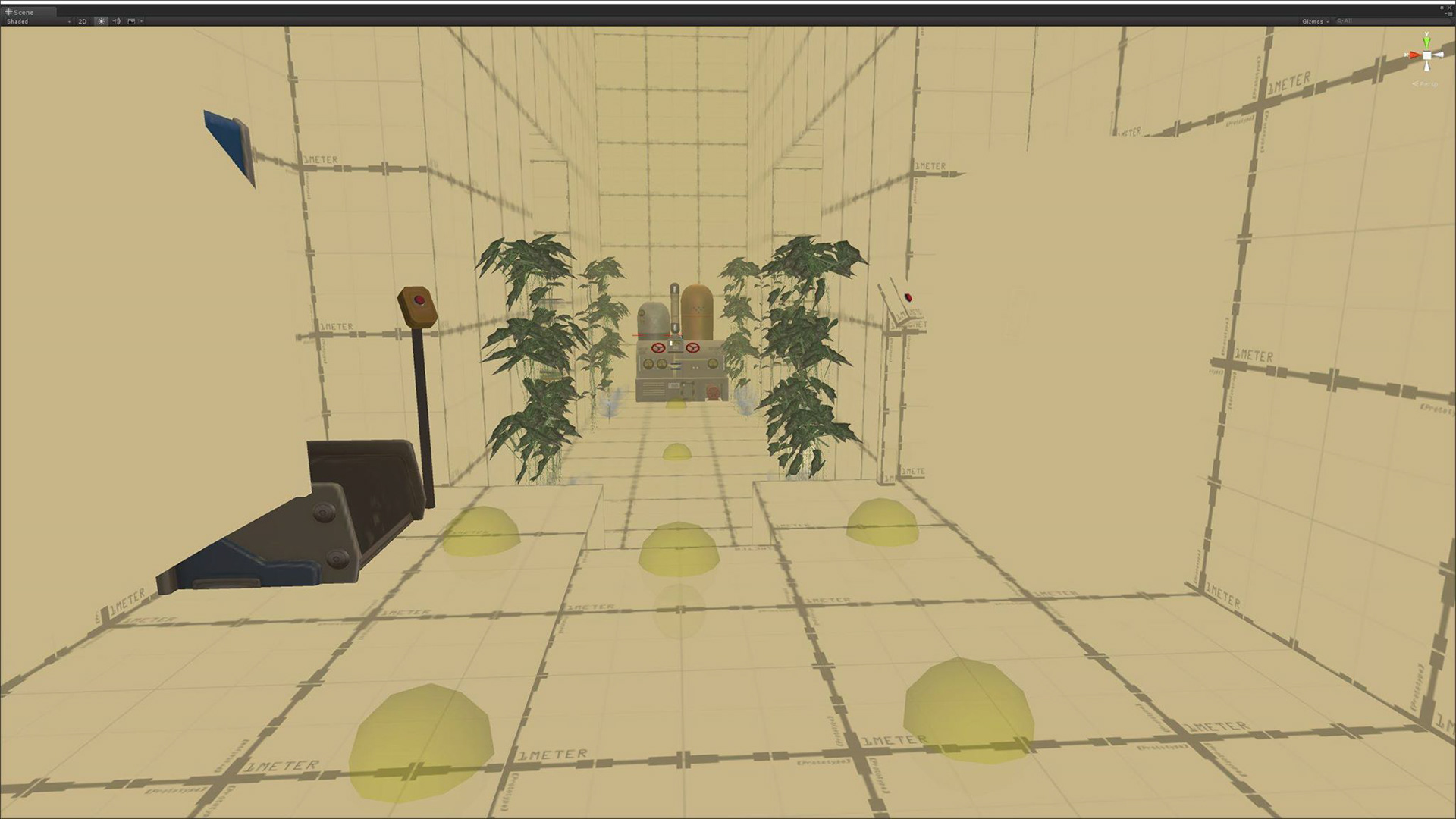 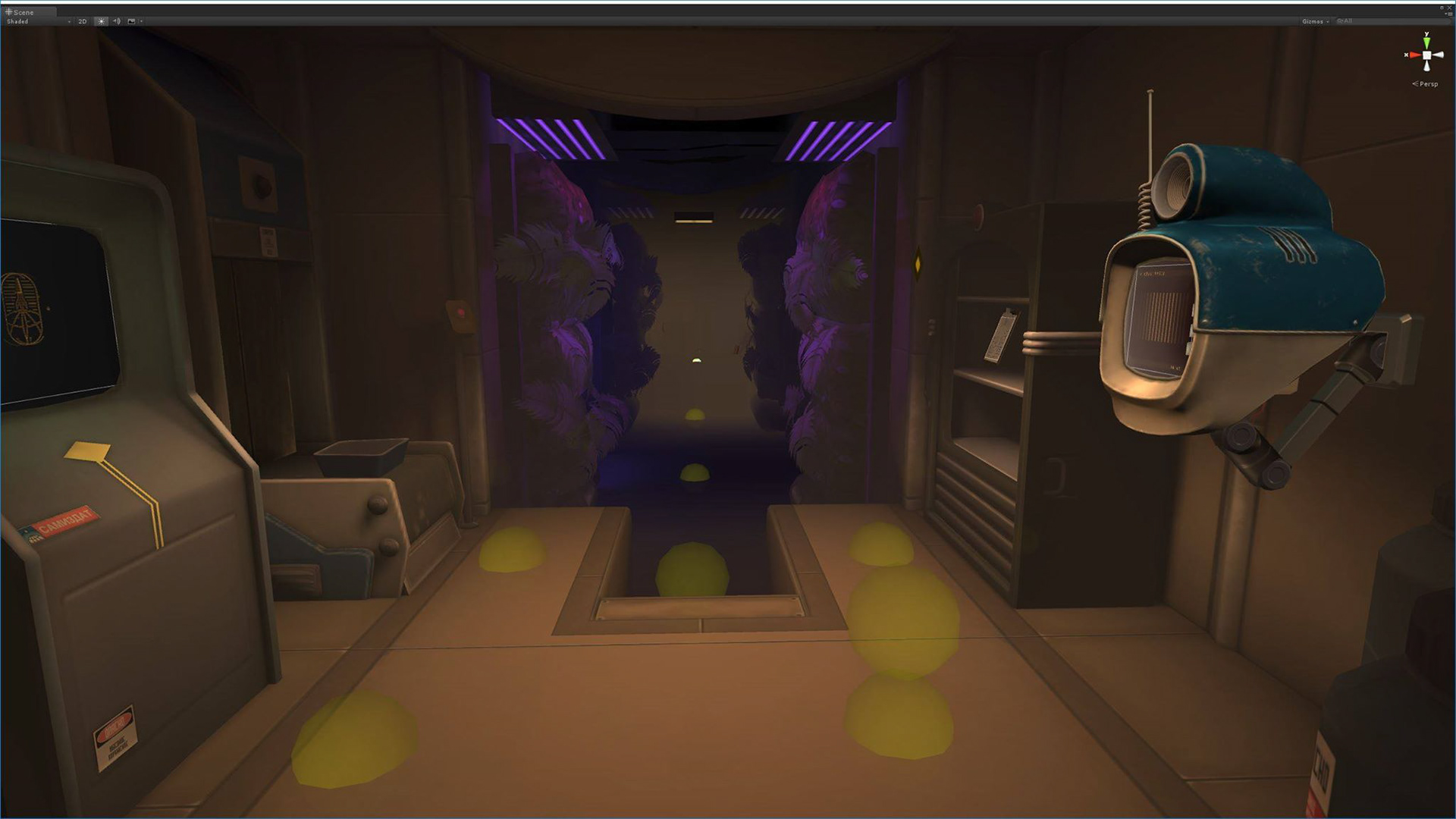 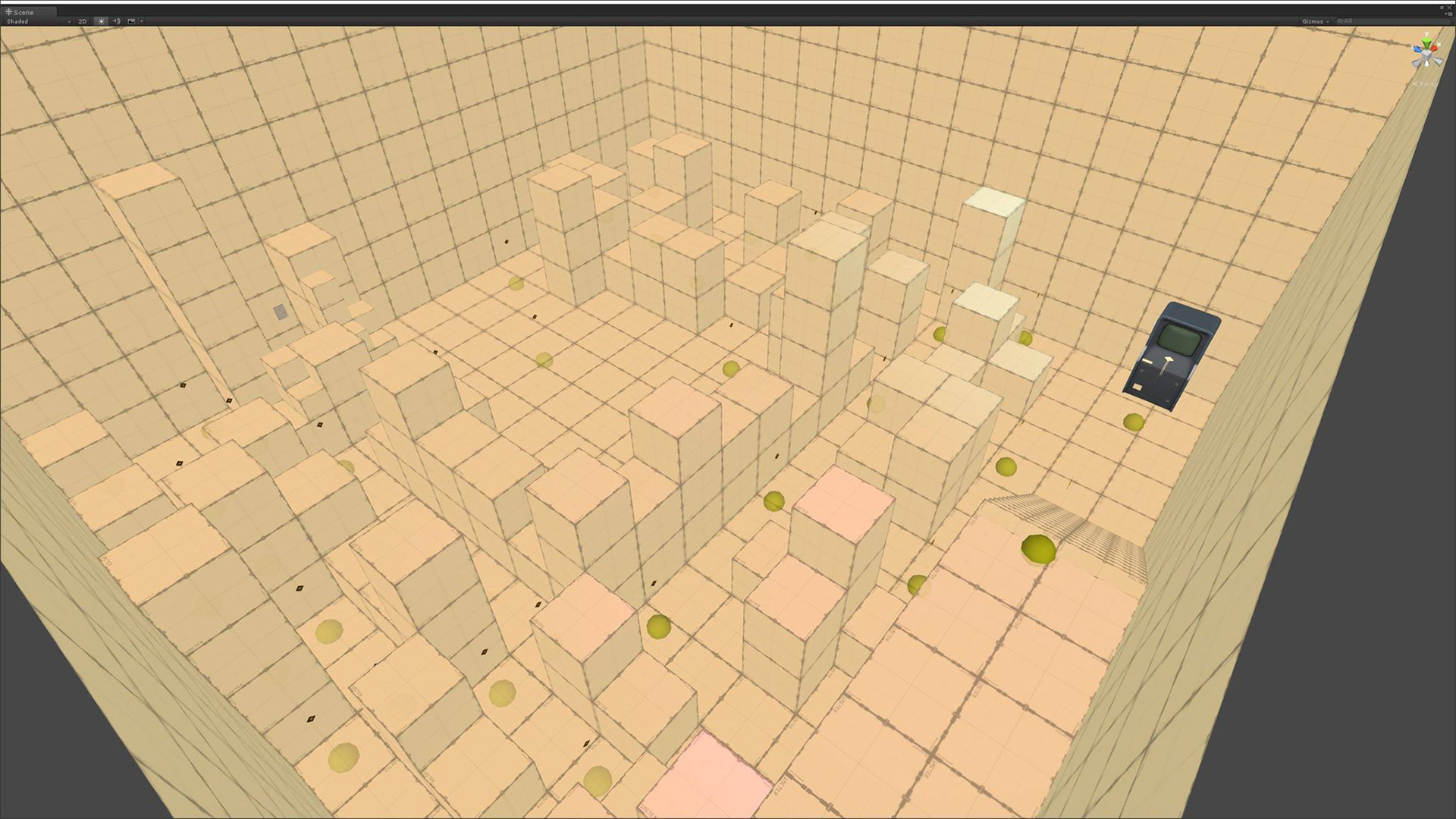 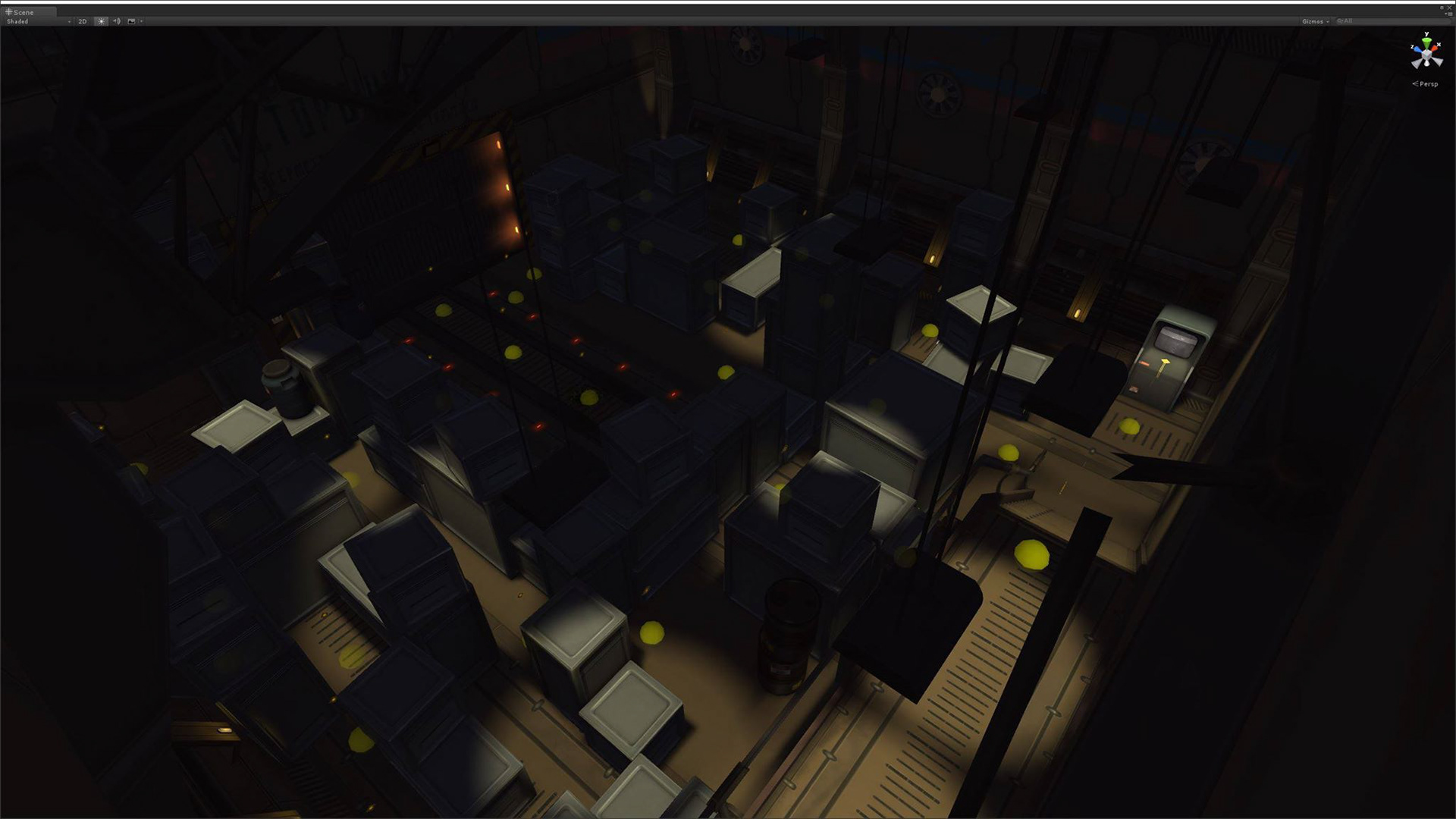