Conflict0: Shattered is a narrative first person shooter for Samsung Gear VR. 35 years after a civil war, the last Sovereign has finally been located. Your mission is simple: infiltrate the base, locate the target and eliminate them. The weapon of choice is a specially modified old war robot, capable of taking its own actions.
My responsibilities as senior game designer, working on the proof of concept, were:
- Designing core mechanics and systems to communicate the game concept.
- Documenting and keeping the Confluence pages up to date.
- Designing and following up implementation of features with engineering and art teams.
- Polishing the game feel of core mechanics.
- Developing the level design, to tell the intended story of the proof of concept and promote combat moments.
- Gray-boxing for the tech art team to set the right mood.
- Scripting enemies AI, using Behavior Designer behavior tree Unity plugin.
Developed by: Black River Studios, 2017
Platform: Samsung Gear VR
Tech Environment: Unity, PlayMaker, Behavior Tree, Confluence, Git
As a narrative shooting game, the proof of concept of Conflict 0 needed to validate the action moments, since Black River already had a proven track of narrative with Angest. My previous experiences working on the first person shooter Ballistic were handy to ensure the success of Conflic 0 proof of concept.
The player assumed the role of a scrapper who happened to find an old robot that had an AI and was also possible to pilot. With that in mind, I designed a set of core mechanics consisting of searching for parts, being a game mechanic that conveyed who the character was, shooting on foot, having the robot fight on its own, shooting inside the robot and our unique feature for a Gear VR shooting game: swordfighting.
When analyzing competitor games, it was noteworthy that they didn't offer recoil while shooting, making the experience of gunfight less immersive. With that in mind, both guns available on the proof of concept were packed with recoil, each with different levels of punch. When shooting with the scrapper, it was a fast and soft recoil since it was a small and weak blaster, whereas for the robot it was intense and with slow recovery, as it was literally a hand cannon. Having a rewarding shooting feel improved the sense of presence of using the Gear VR Controller.
Working on the swordfighting was an interesting experience, as the gameplay consisted of a series of quick time event in which the player should move the controller in the indicated directions. The gameplay was balanced to require emphatic movements, preventing players to cheat by making short gestures and providing the experience of really making an effort to wield the sword and win the duel. 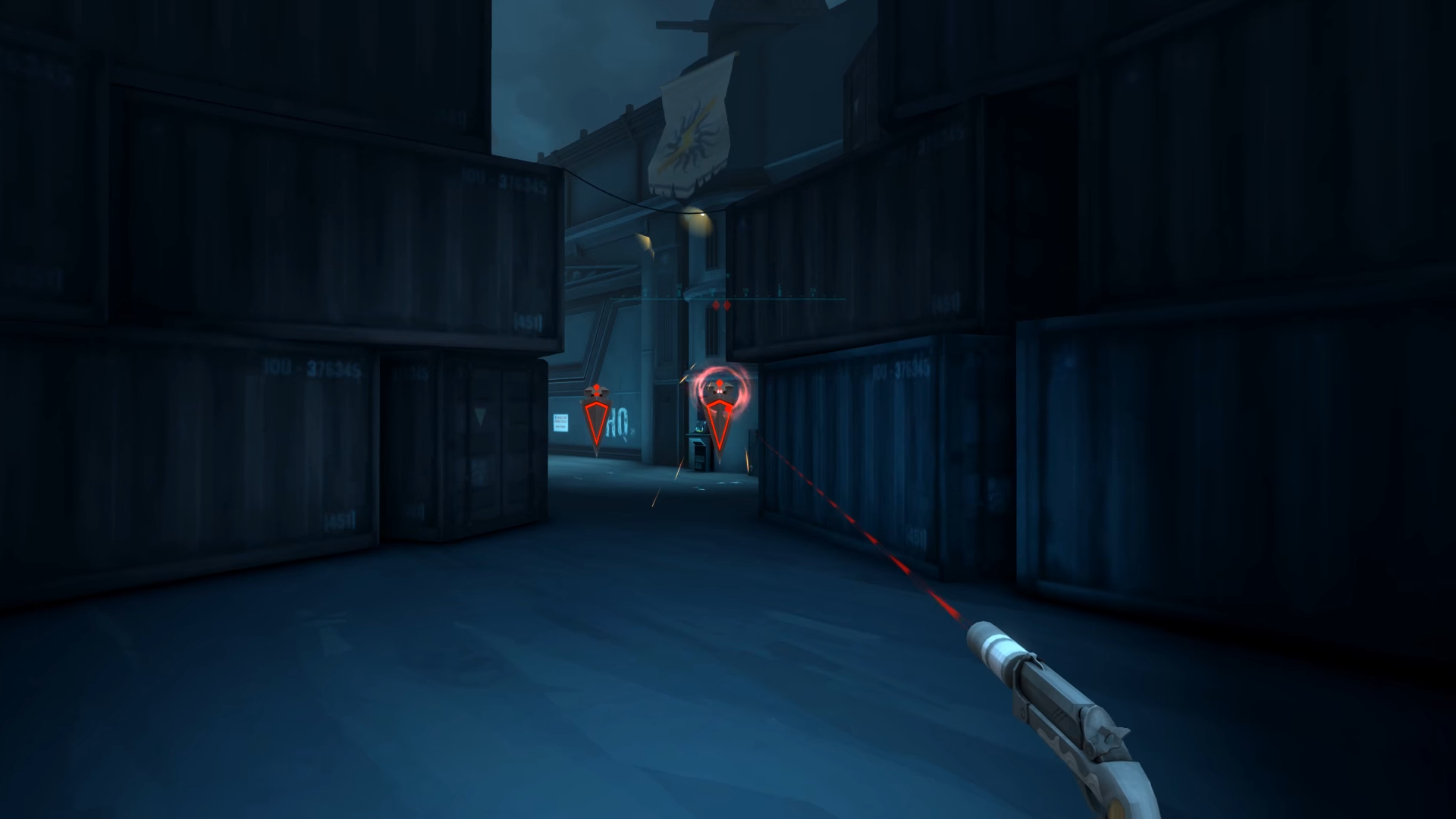 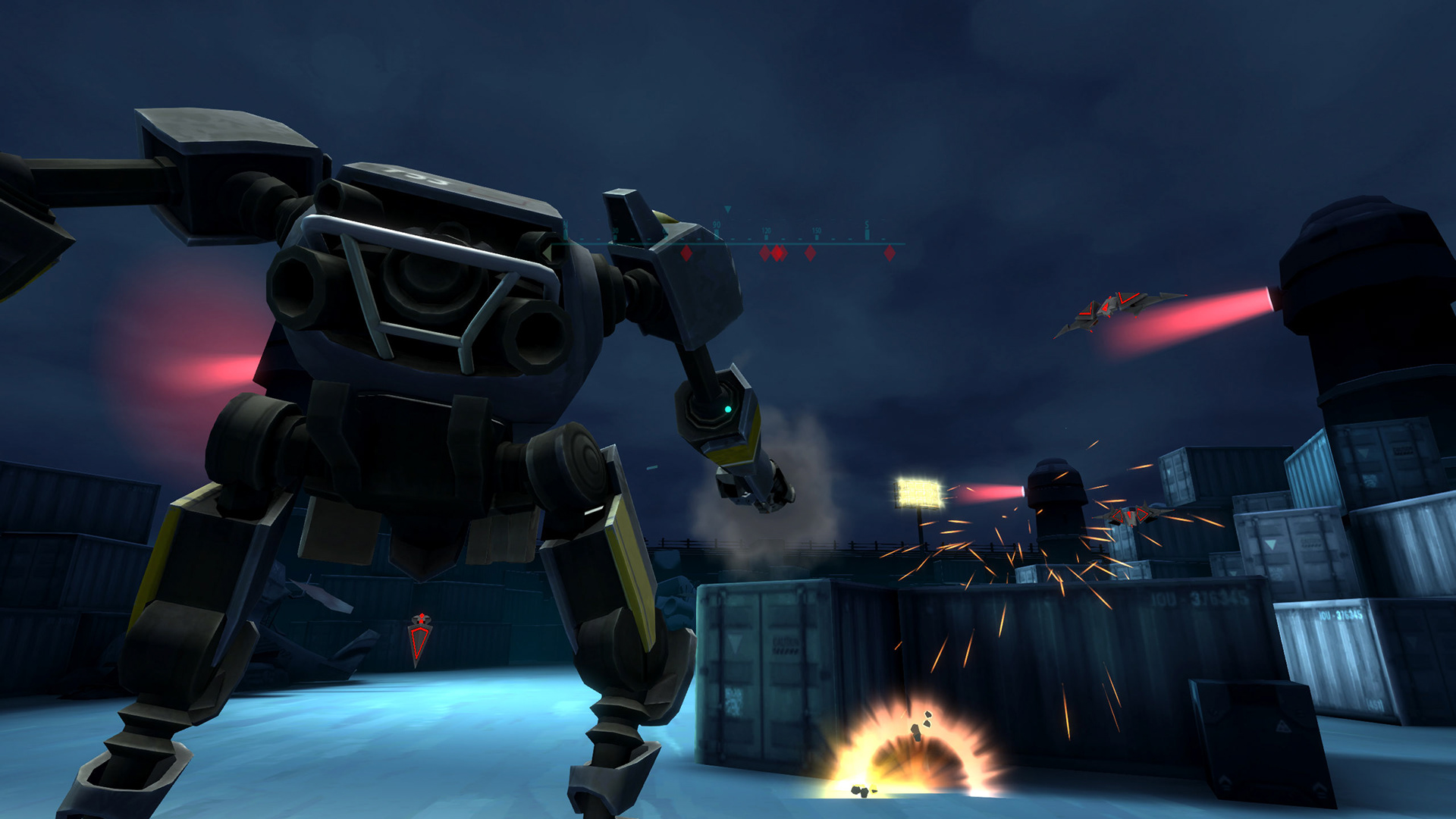 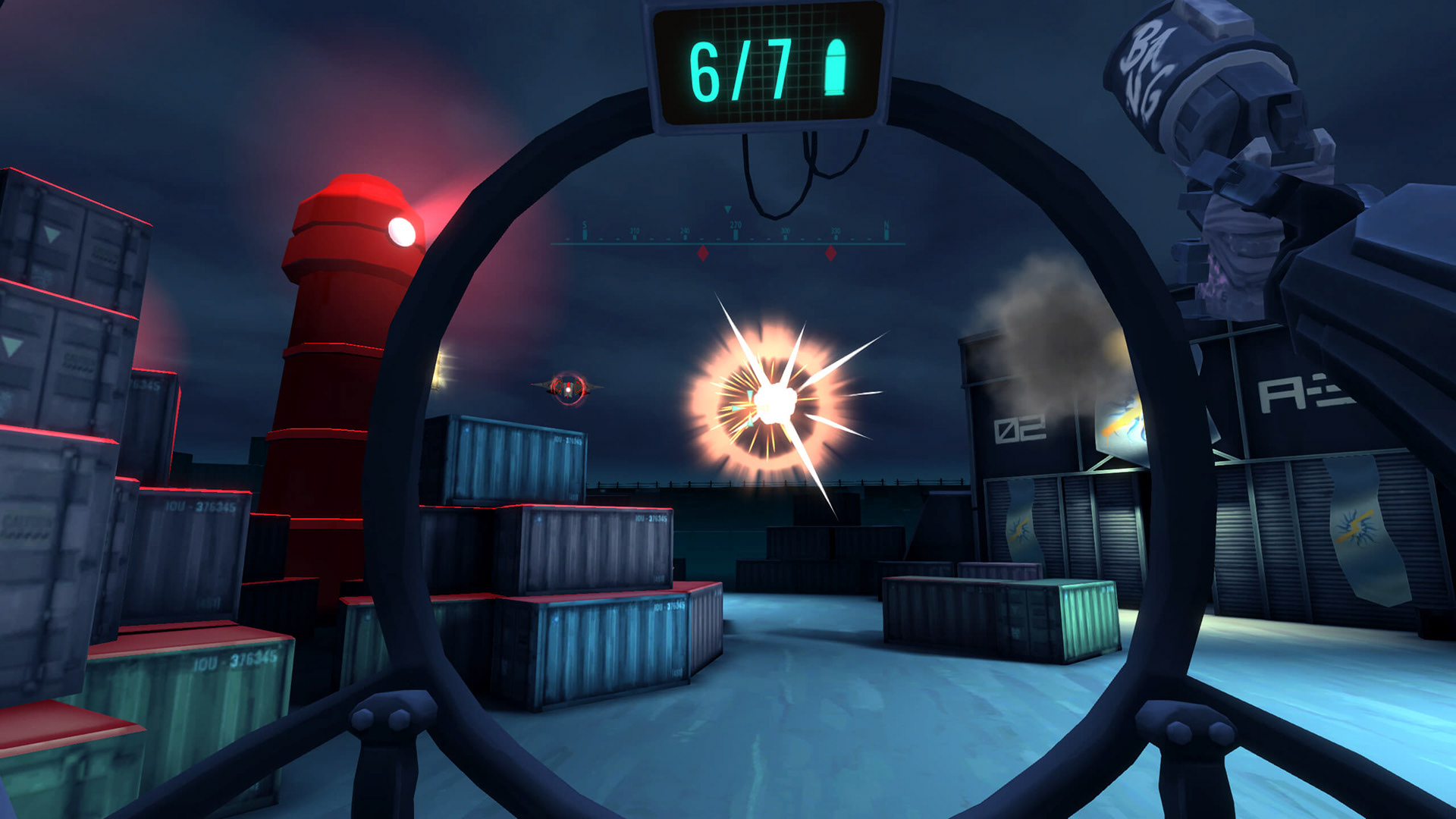 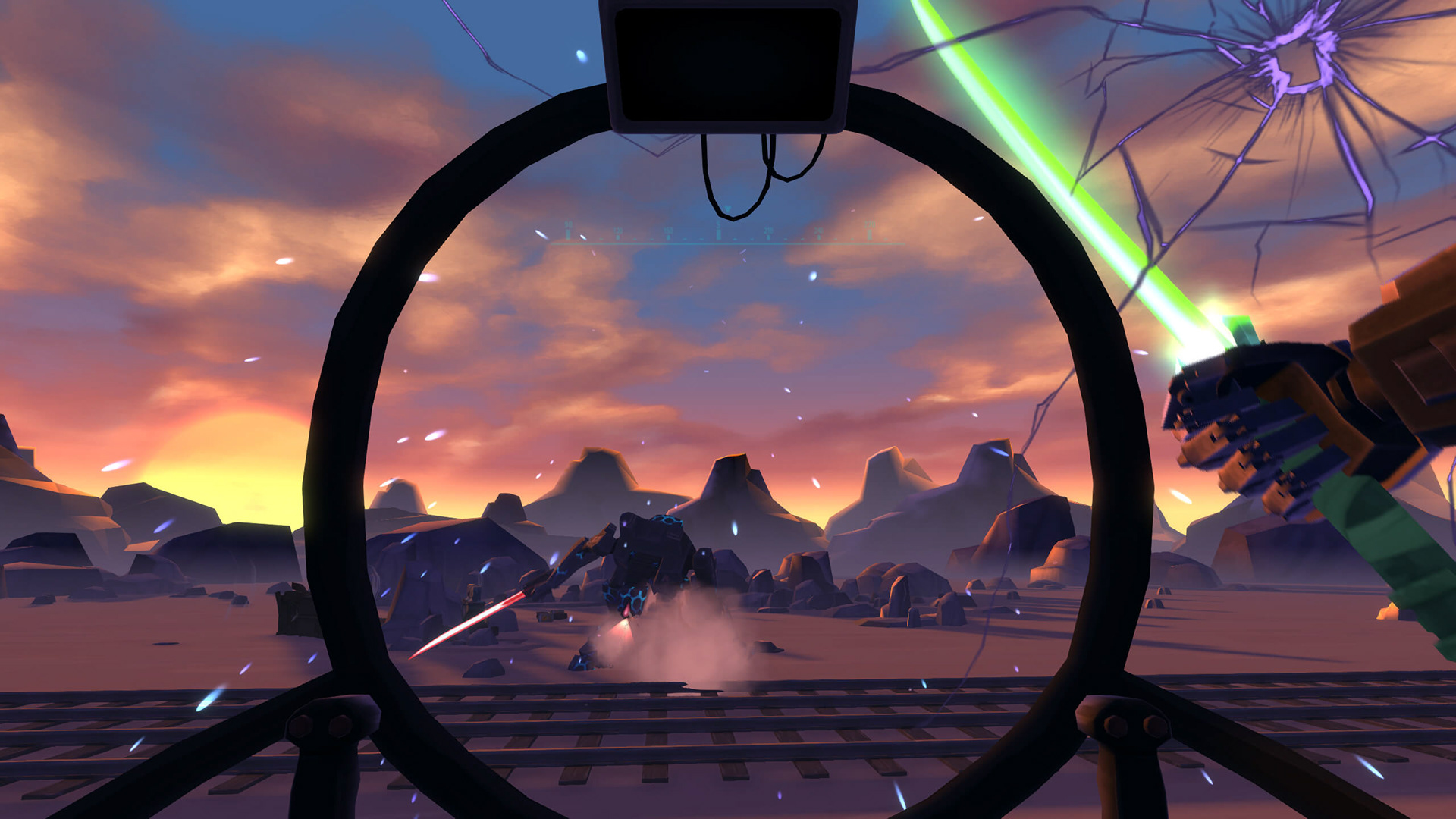 Inspired by one of the illustrations from the concept artist, I realized that scene had the potential to provide the compelling gameplay needed for the action part of the proof of concept. The scene would introduce two kinds of enemies, flying drones and scrappers, ending with a boss fighting with another sword wielding robot. When building the level design, I relied on curved paths to focus the attention to each moment and concealing the following ones, contributing both to a sense of natural flow and to make clear distinctions of each moment.
For the enemy behaviors, I avoided the use of slotting. Instead, I designed them for having a slower preparation time and a progressively better accuracy, so the player wouldn't feel the enemies were just waiting the system to allow them to act.
Flying drones would enter combat mode and keep flying around the player and shooting, each time closer to hitting, whereas scrapper enemies had a laser sight, providing feedback for the player of when they were about to hit. Each time a shot was fired, the next one would have less preparation time and greater chance to hit. Some scrappers could also adopt the role of providing suppressing fire, while others would advance attempting to flank the player. The combination of those behaviors conveyed the feeling that they were tactically approaching the player, and provided contrast to the behavior of the flying drones. 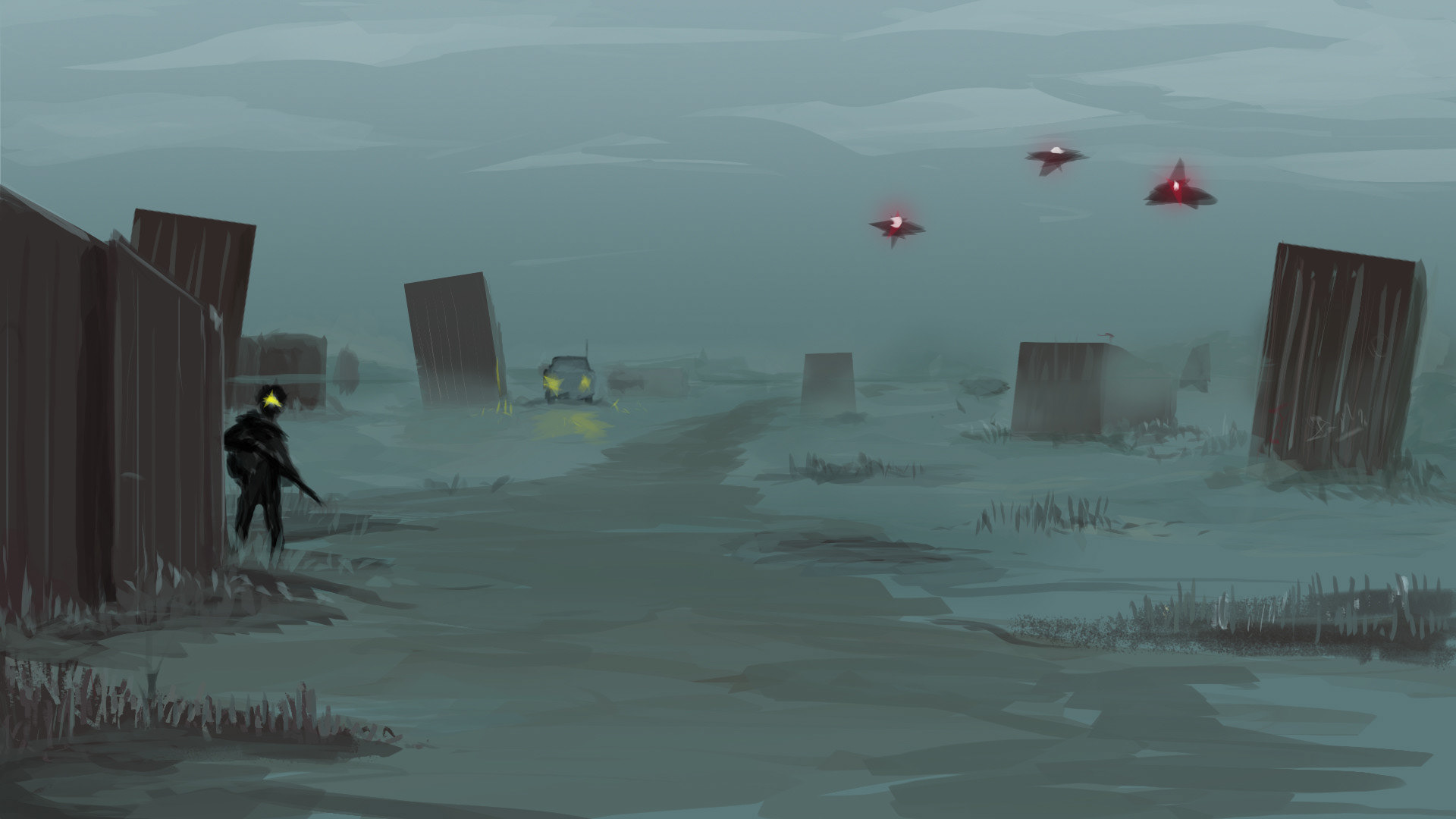 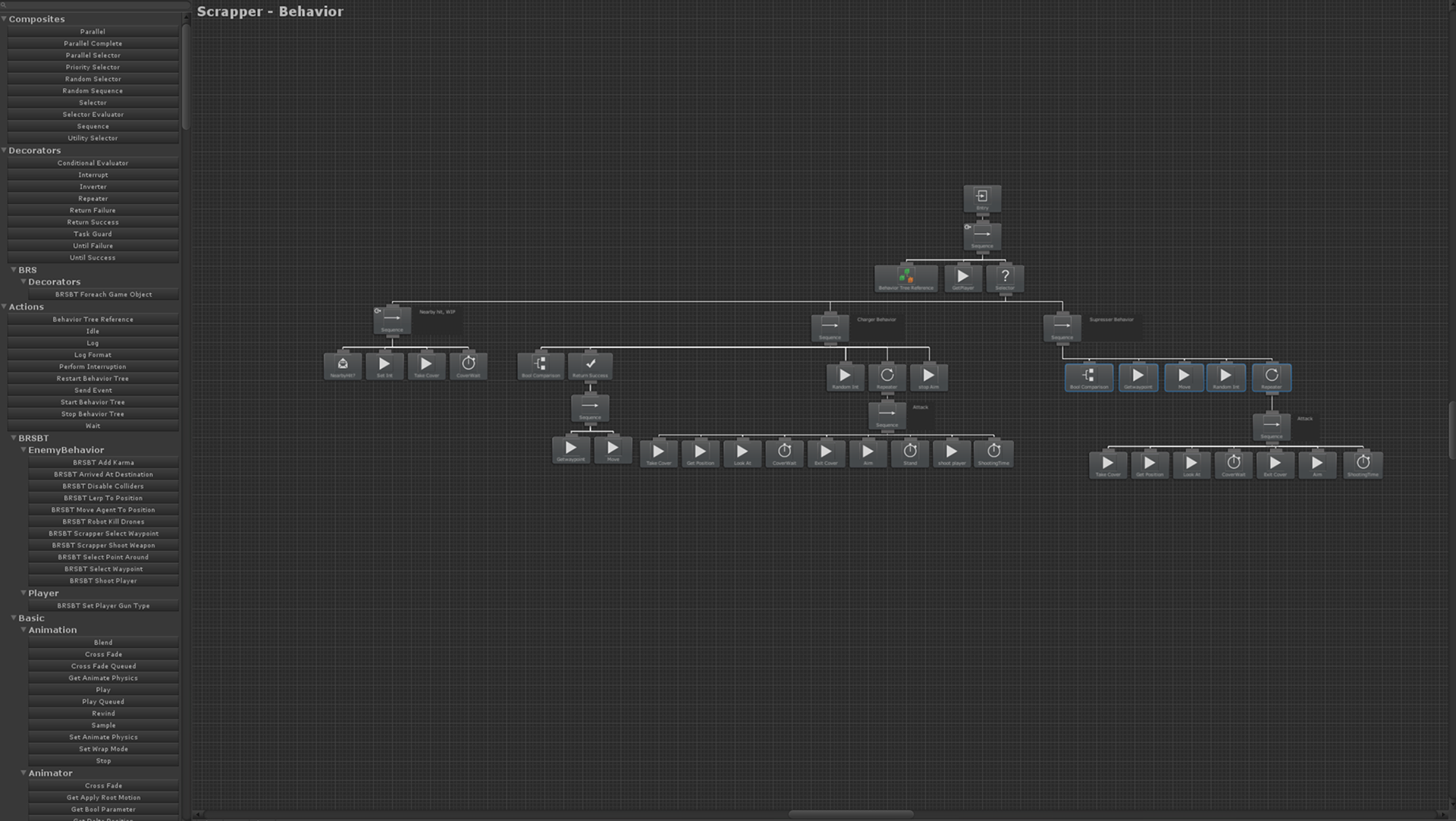