Finding Monsters Adventures is the story of siblings Jake and Tess' quest to find and photograph all the weird monsters and save a dream world that is falling apart. The player must grab their phone and assist them in this journey to get the best and funniest pictures of  each crazy monster.
My responsibilities as game designer were:
- Designing core mechanics and systems to communicate the game concept.
- Documenting and keeping the Confluence pages up to date.
- Designing characters' personalities, for animation team to bring them to life.
- Designing and prototyping game features.
- Designing and debugging, with the lead engineer, the custom AI scripting tool.
- Following up with engineering and art teams the implementation of features.
- Planning, building and scripting the level design.
- Gray-boxing for the art team to create assets and  tech artists to make each level look stunning.
- Scripting the monsters' AI and providing scenic moments to the game.
- Designing rewards system.
Developed by: Black River Studios, 2015
Platform: Android devices
Tech Environment: Unity, PlayMaker, ProBuilder, Custom tools, Confluence, Git, Twine, Illustrator, Photoshop
Finding Monsters Adventure didn't start as a game only about photographing cute creatures. During early stages, the game loop of Finding Monsters consisted in placing sensors in the overwold map to lure monsters and then be able to photograph them. There were three different kinds of sensors, each kind would trigger a different mini-game and the sensor would be placed upon completion.
One of my first contributions to the project was proposing to use a single mini-game, which was later followed by the creative director proposing to focus the scope solely in photographig.
Having defined photos as the very core of the game, it was possible to define gameplay elements and features that would enhance the experience of taking pictures of the charismatic monsters. After conducting playtests, camera controls were improved, allowing players to control the game with the gyroscope and accelerometer, by moving their phones, swiping the screen to drag the camera, or a combination of both methods. Additional items were designed and prototyped, such as fireworks and masks for selfie mode and more emphasis was put into making the monsters AI responsive and providing enough depth to be explored in each level. 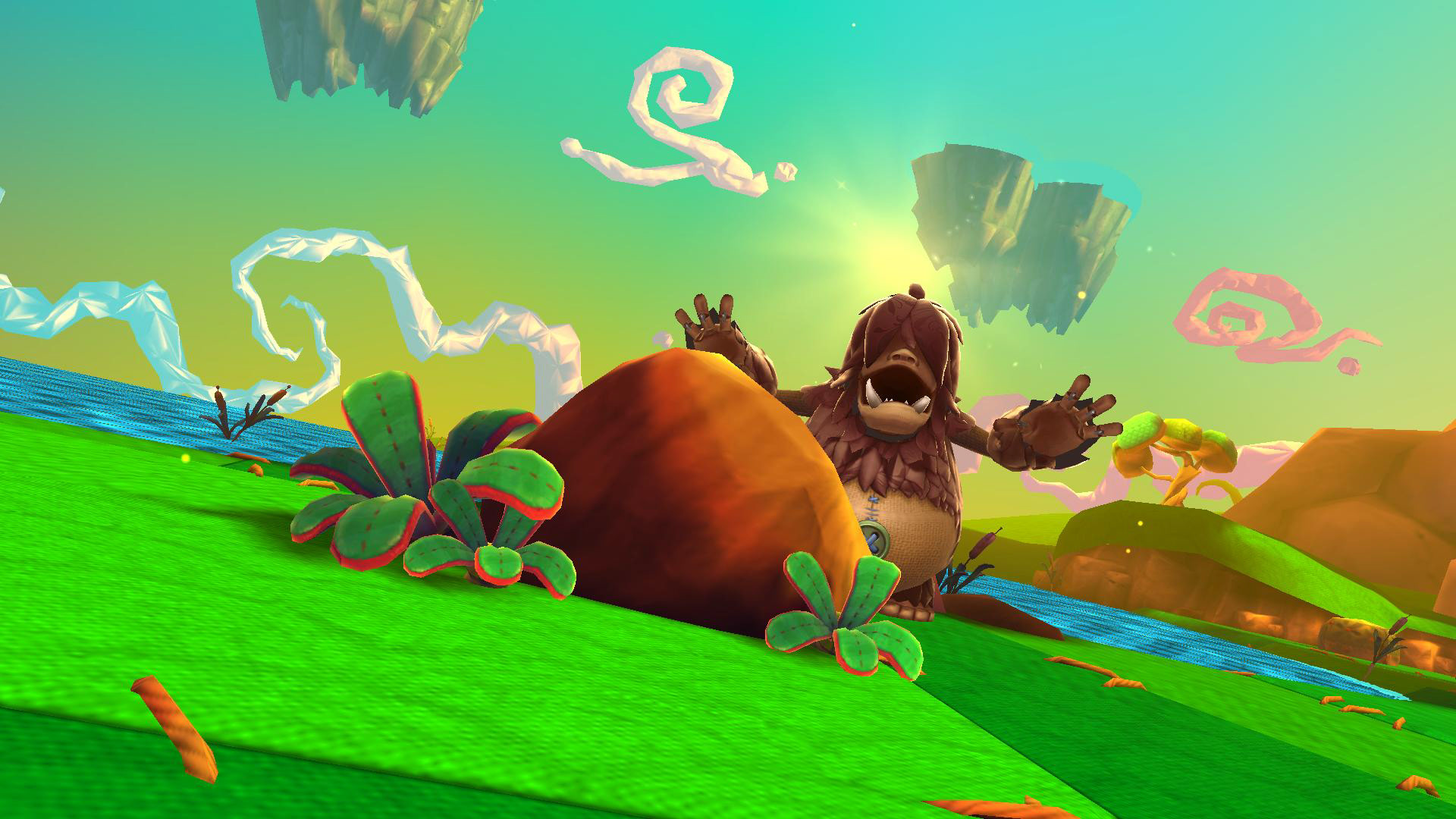 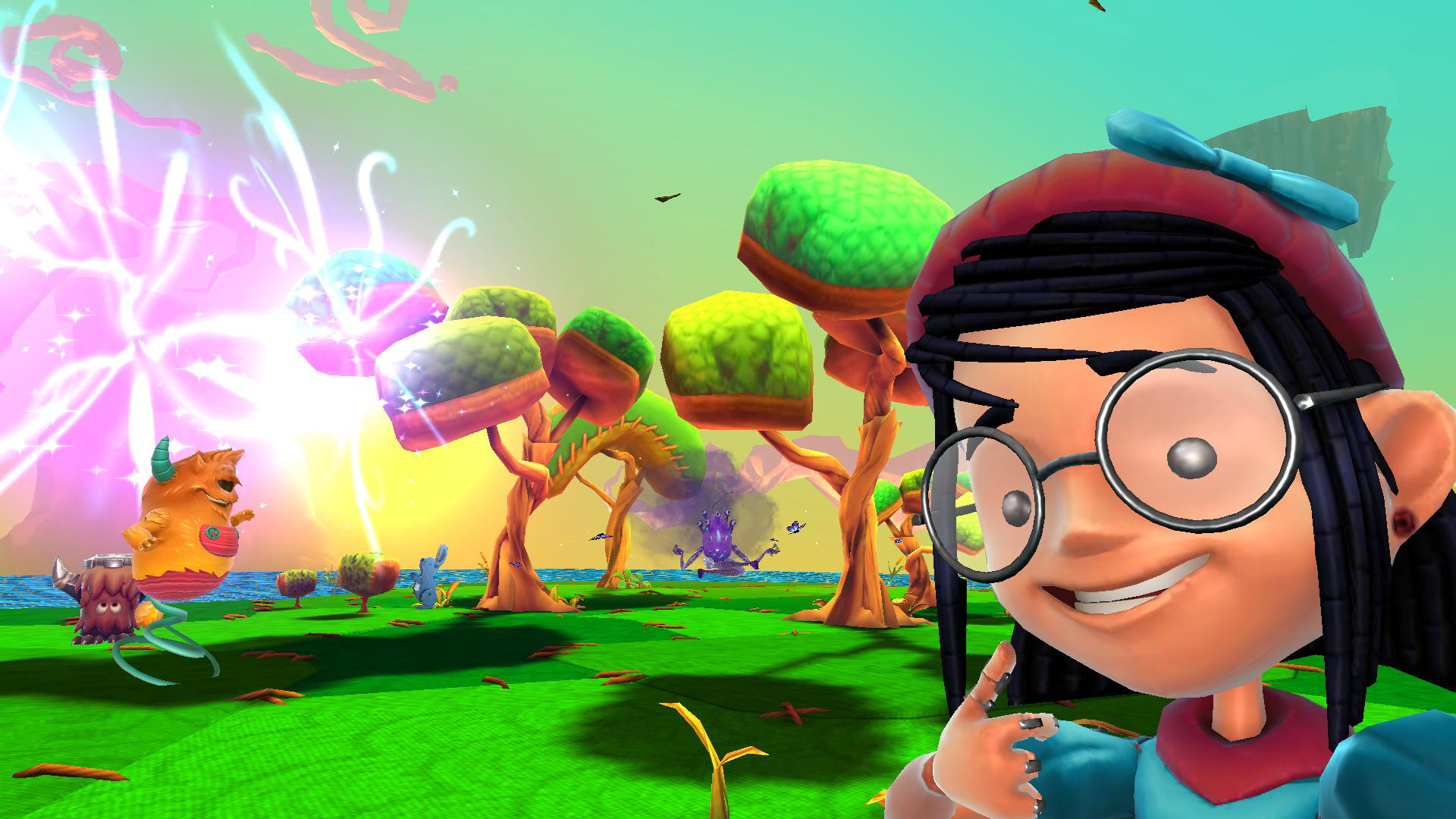 The early stages of designing levels for Finding Monsters included gray-boxing each level and documenting for the tech art team to assume the scene, once the designers were working on a new one. For the overworld, gray-boxing was made using ProBuilder. However, the plugin had to be removed from the project and the gray-boxing for each level was made with primitives from Unity. Although primitives weren't as easy to understand as models from ProBuilder, this situation had the upside of demanding a significant improvement in the communication with the tech artists. This improvement was invaluable in future projects from Black River like Finding Monsters VR, which had a tight deadline, and Angest, which needed a close cooperation of designers and tech artists to set the proper mood.
During the process of developing the game features, I helped the lead programmer to create the tool for editing the AI of the monsters, by defining and documenting the design requisites and negotiating with him a scope that could be delivered in time and that would allow the design team to get the most of the tool. Other tool that helped the process of the design team was the animation moments editor, that allowed to flag a moment range in an animation clip. This had several uses, from being able to make a monster switch masks to defining a frame range that would provide best scoring pictures.
Previous knowledge with scripting and experience with the engine allowed me to swiftly get familiarized with the AI editor. This was crucial when close to the releasing deadline, while giving the game the final polishing and fine tuning each level, as the other designers from the team were already allocated in the upcoming Rock & Rails project. 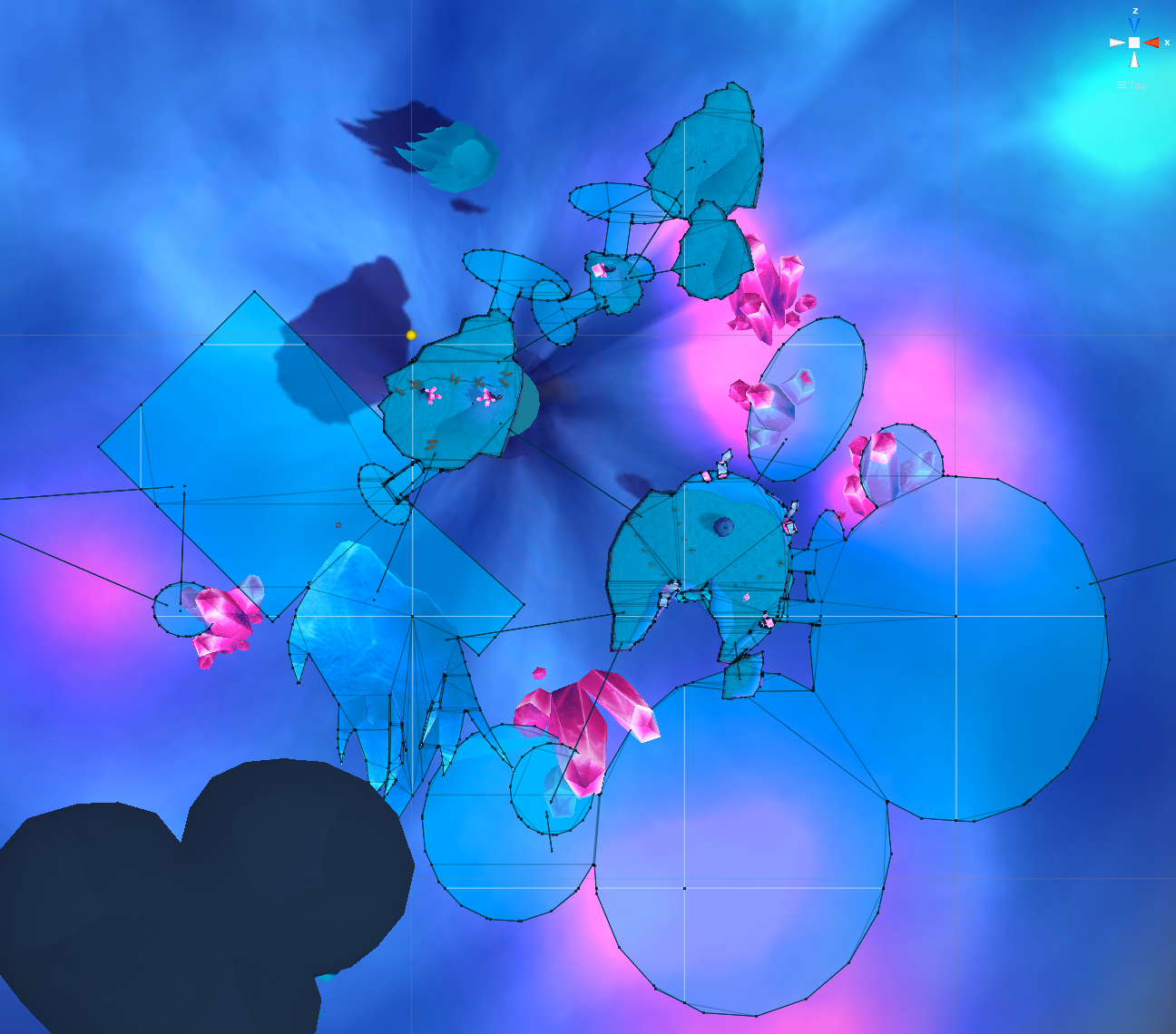 Progression in Finding Monsters Adventure was determined by accumulating star buttons. Each level could grant up to four star buttons, three by achieving enough score and an additional one by completing a dare list. Stars collected could also be traded by selfie masks.
The scoring system proved to be one of the hardest challenges of Finding Monsters. Designing a consistent picture evaluation system without demanding players to apply refined knowledge in photograph composition, and that wouldn't be too demanding, was a hard feature to solve. A fellow designer started defining a point attribution system and I helped by proposing the use of colliders to tag each category of his system into scenes. That allowed us to have freedom of evaluating each level scenic places and attribute category and tiers to each collider.
Elements measured by the scoring system were: monster poses with different values according to rarity and "cool factor", framing of environment elements and bonuses from using the selfie and firework features. Along with the UI/UX team, we designed pop-ups to show the categories and quality tiers after each picture was taken, serving as cues to understand the system. While the scoring system was consistent and not demanding of composition knowledge, it was still hard for some players to grasp the logic behind best scoring pictures, even with the interface cues.
Since the game was targeted from kids to adults, we relied on balancing first and second stars to be easier to achieve and I designed a system of dares that were brief riddles, which succeeded in captivating the curiosity of the audience and inciting replay to complete the lists. The dare system was a late addition and couldn't be explored to its full potential, however it was made possible on Finding Monsters Adventure VR. 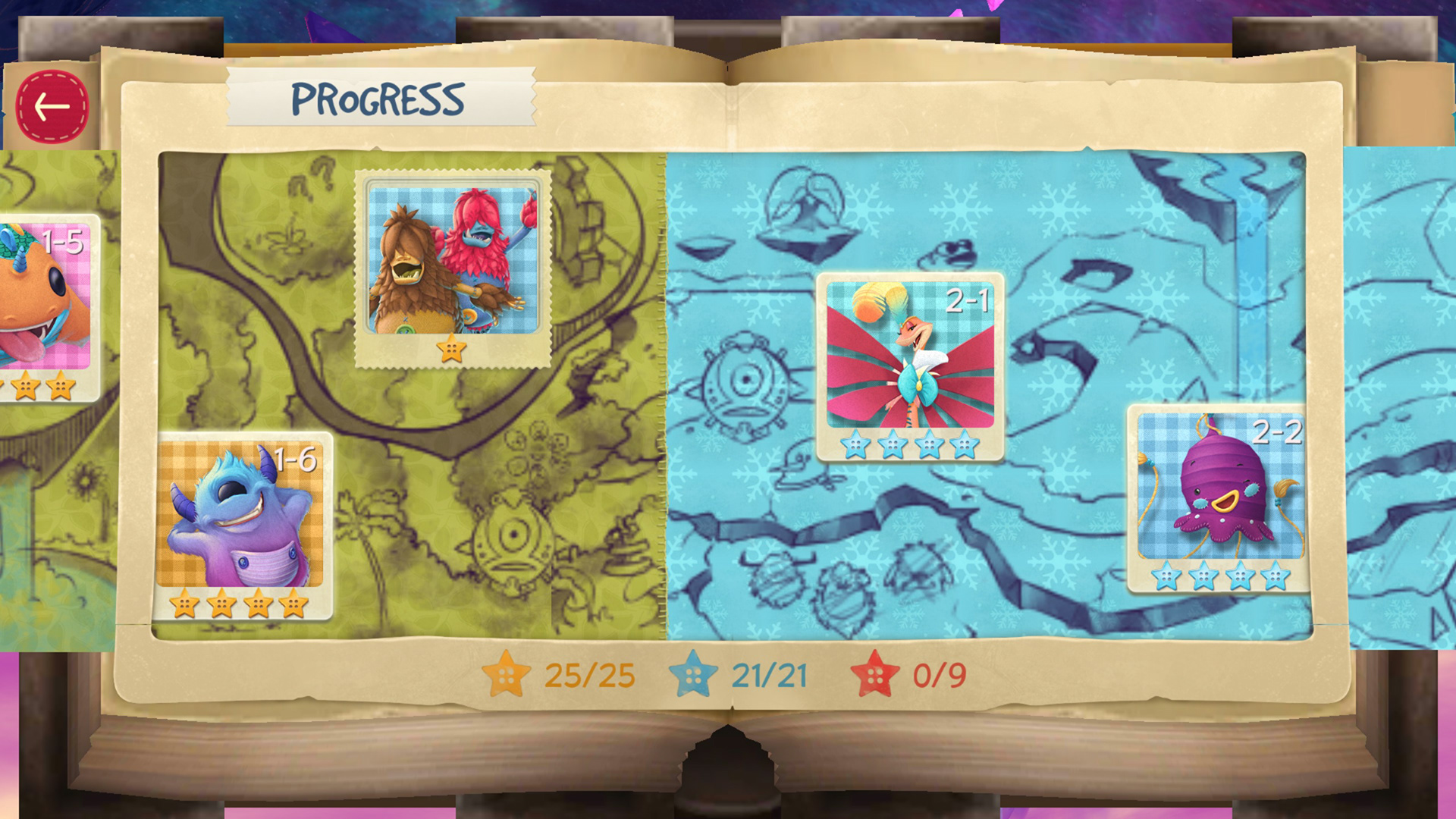 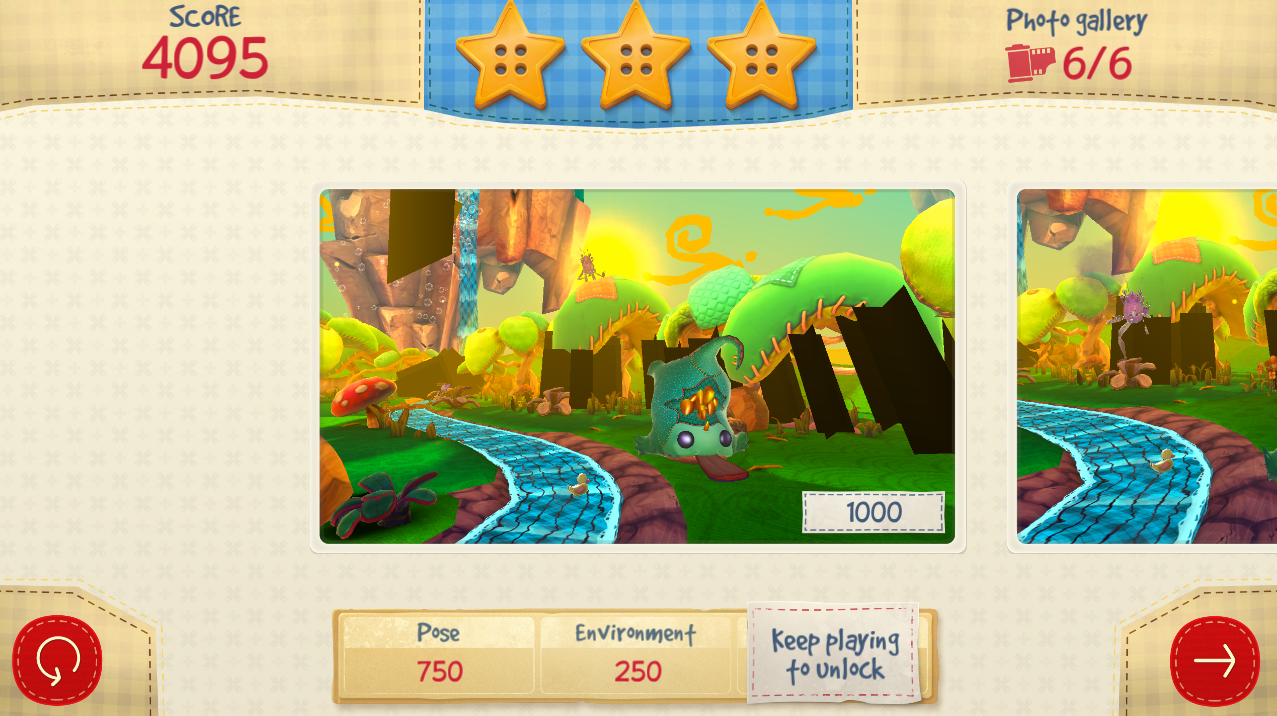 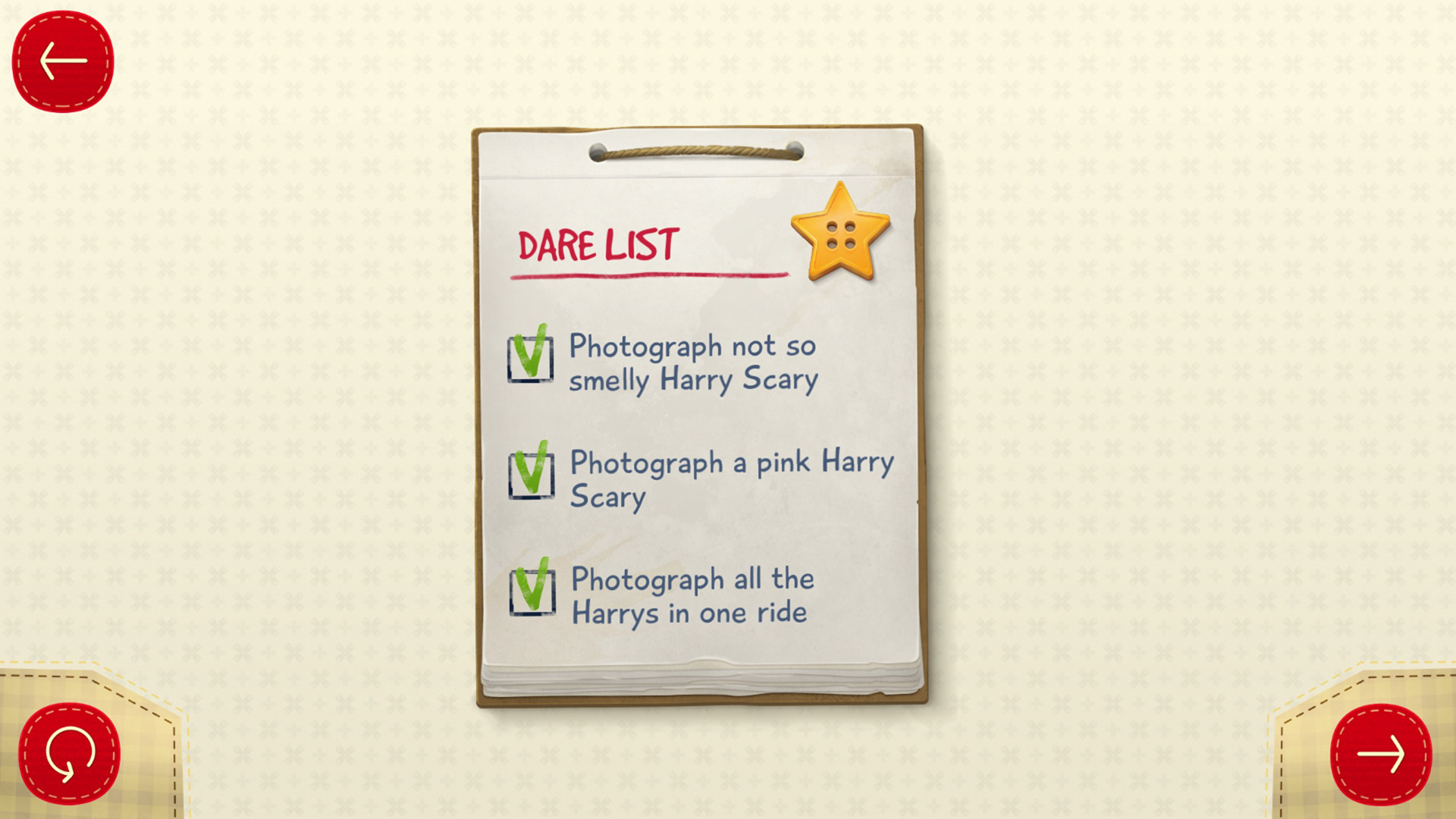