Finding Monsters Adventure on Gear VR is a fantastic photo challenge that continues the magical universe of Jake & Tess, available on smartphones. In FMA VR, you become Jake & Tess as they dare each other to take pictures of the funny, cute & mischievous monsters in this immersive experience.
My responsibilities as game designer were:
- Redefining and designing the game core mechanics to make the best VR experience.
- Designing the rewards system, including a game hub with a plush toy activity.
- Designing and following up implementation of features with engineering and art teams.
- Documenting and keeping the Confluence pages up to date.
- Designing a story for each level, making use of the level environment, monsters' behavior and dare list.
- Assembling levels, making unique environments based on Mobile version.
- Scripting the monsters' AI that not only to provide scenic moments, but to tell a story on each level.
Developed by: Black River Studios, 2015
Platform: Samsung Gear VR
Tech Environment: Unity, PlayMaker, Custom tools, Confluence, Git
Finding Monsters VR had a smaller team and only two months to be shipped as a sharply optimized product for Oculus Store. It was a tight schedule and some concessions had to be made. Regarding the design of the game, the major one was removing the scoring system. The score on mobile worked by rewarding three categories of elements: monster poses with different values according to rarity and "cool factor", framing of environment elements and bonuses from using the selfie and firework features. According to the points sum of all taken pictures, up to three stars could be achieved. In the end, it was possible to get an additional star by completing a dare list with three challenges.
The dare system consisted of a series of small objectives that reward players for exploring the levels, monsters' behaviours, and sometimes acting within proper time. It was a system that came late during mobile development and proved to be more successful than anticipated. People were enthusiastic to replay levels in order to complete dares.
Dares were the right system for the intended VR gameplay. To further explore its potential, dare lists grew from three entries per level to five. This was a reasonable number since designing more dares meant increasing the scope of the levels and we couldn't risk missing the deadlines we had already committed. 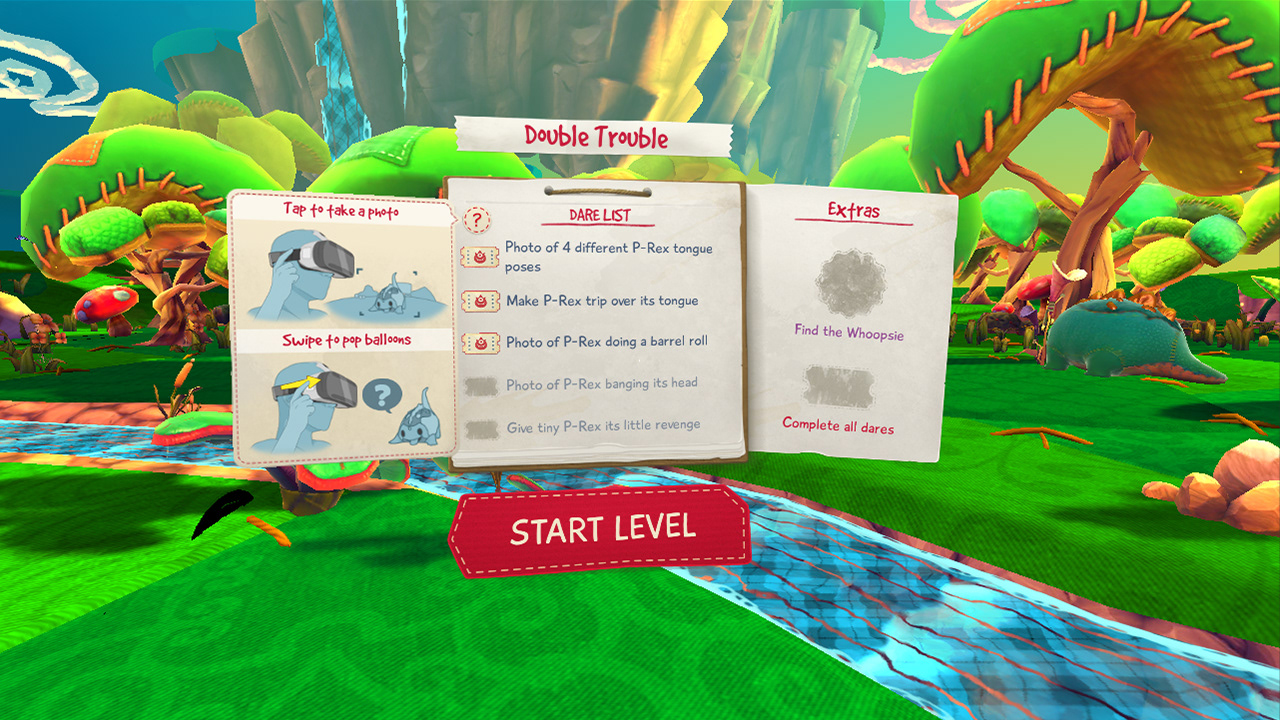 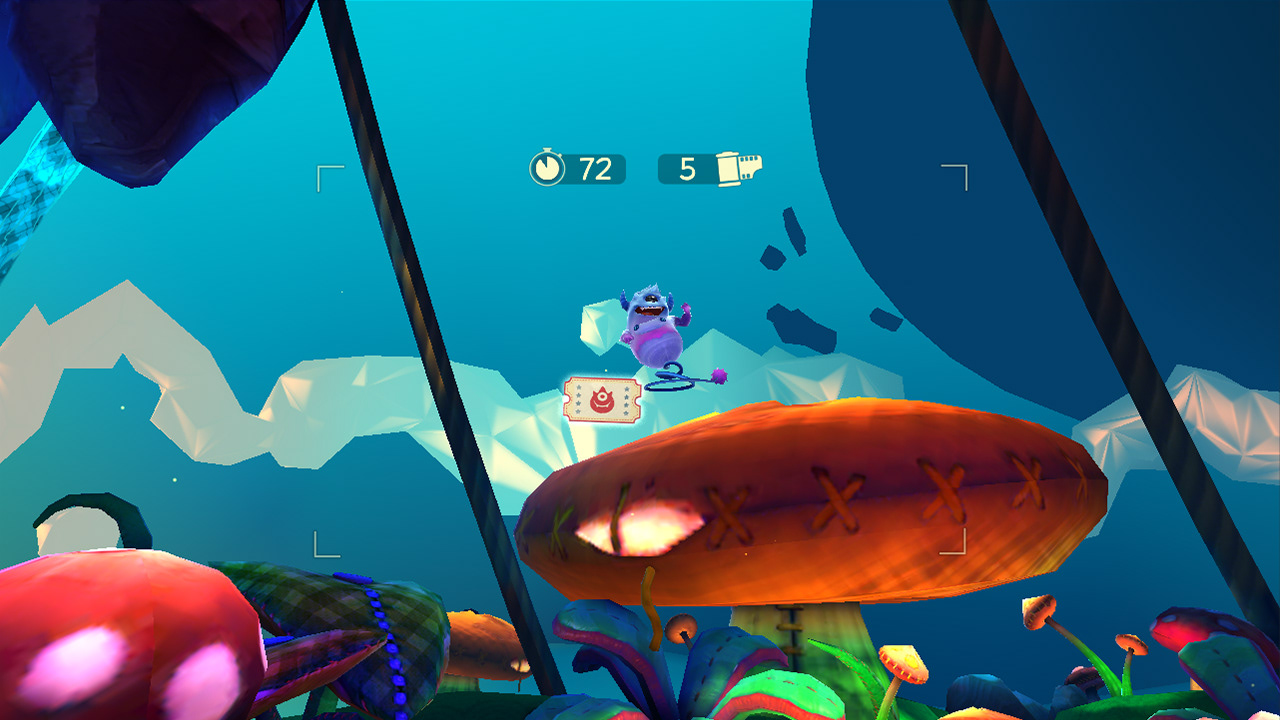 On Finding Monsters Mobile, stars were used to unlock regular levels, special levels and masks. Masks were meant to be used during selfie mode, which is a feature that we didn't bring to VR, as we wanted to avoid messing with the camera, for VR ergonomy. We also wouldn’t have distinctions of regular and special levels. This meant we'd have less rewards, and it needed to be compensated.
Instead of having masks as rewards, the team agreed to create plushies of the game characters and bonsai-like trophies of each world, which could be unlocked and interacted with in the kids' room game hub. Cutting the scoring system lead to a simpler progression, which was in line with the objective of making the experience more accessible.
Each completed dare would award the player with a ticket, just like at midway-style arcade games. Completing the list and photographing the Whoopsie monster granted two extra tickets per level. After a certain amounts of tickets you'd be able to redeem them for plushies from a magical chest Jake and Tess' room. The interaction of picking up plushies and throwing them around the room was rewarding and especially fun when throwing them at the sleeping characters. 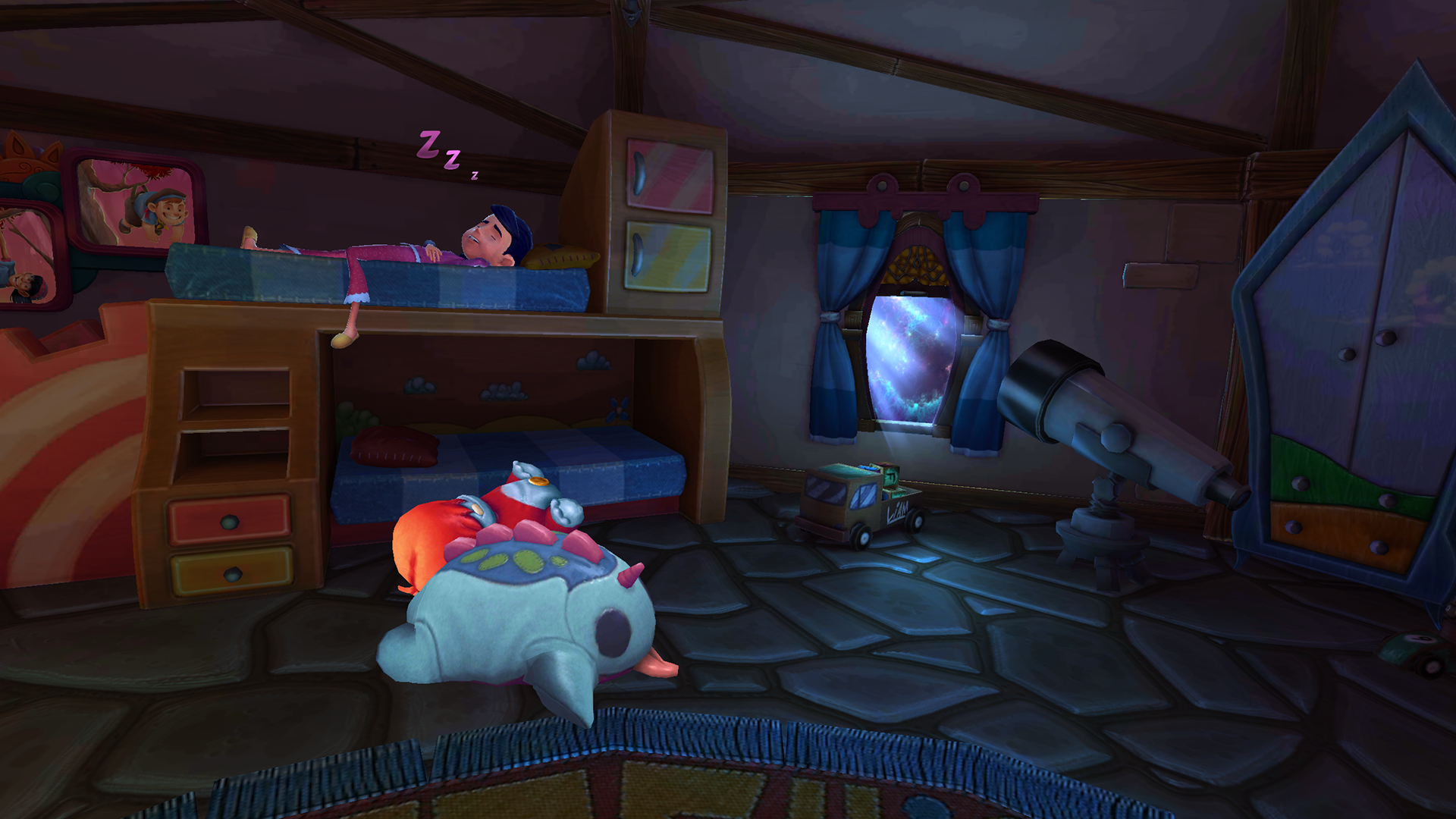 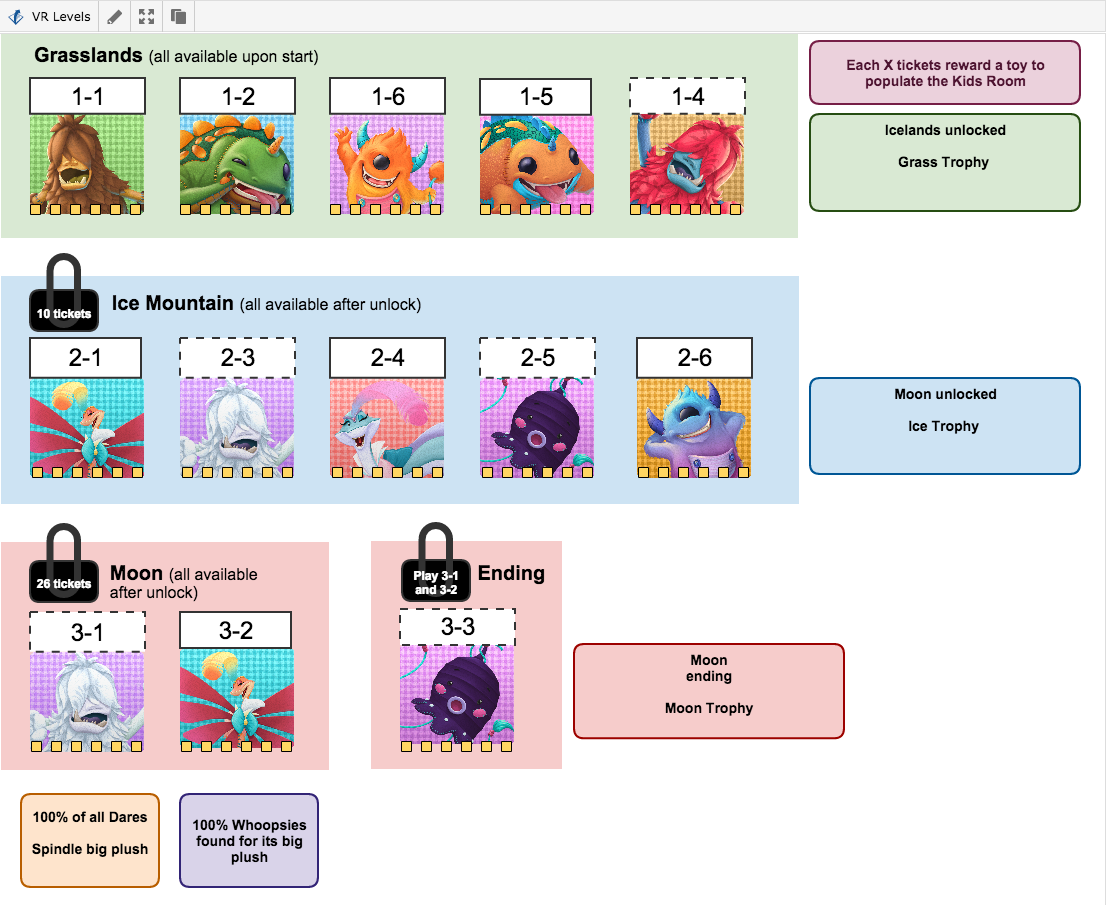 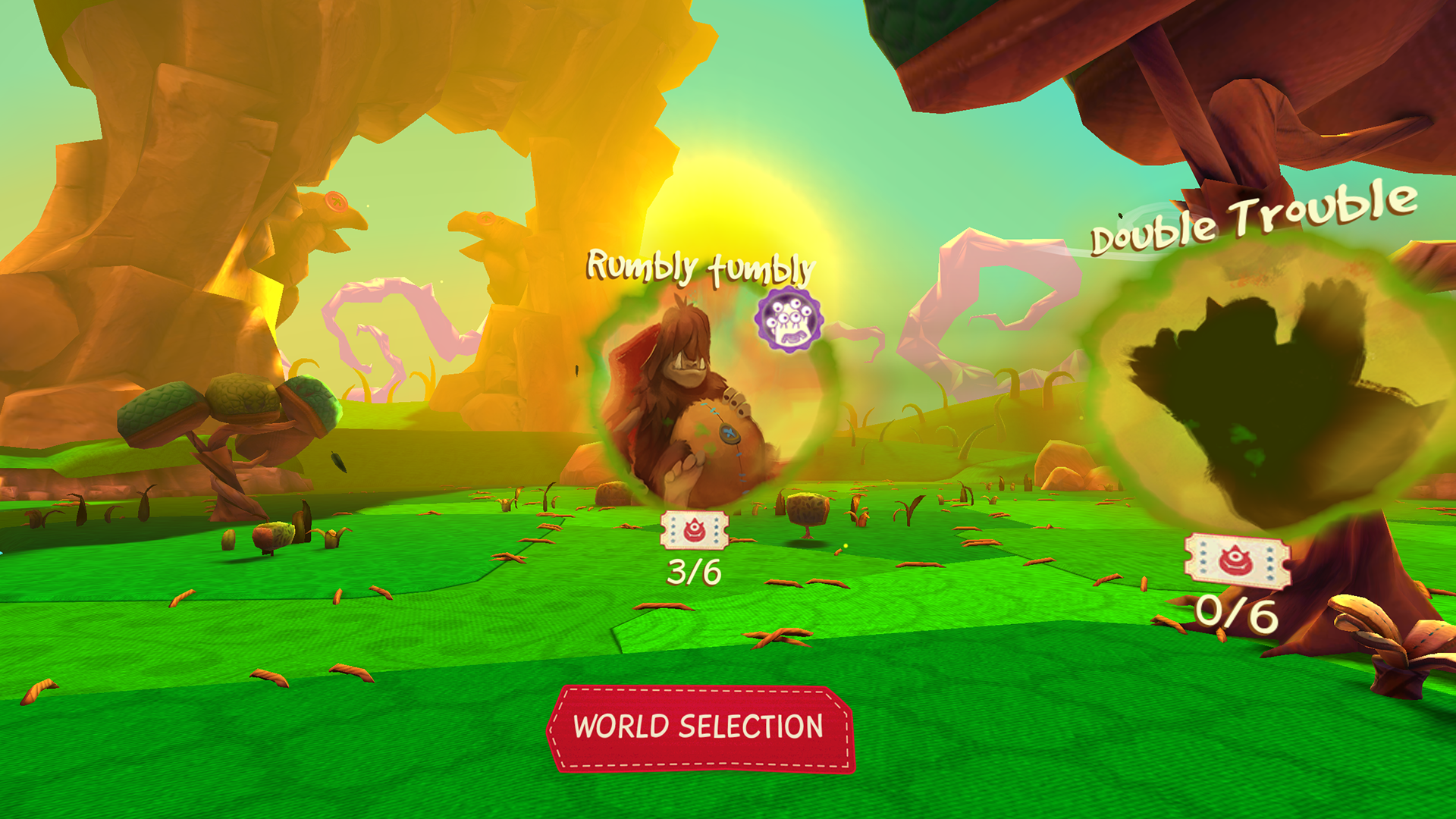 When planning the game design scope, I promised the producer to deliver 13 unique levels. They were distributed as 5 Grasslands levels, 5 Ice Mountains levels and 3 Moon levels. Another commitment was that each of these new levels should feel like a new experience, so someone who played the mobile version of Finding Monsters would feel it was a fresh experience, even with familiar elements.
VR is all about promoting the sense of presence for players and making them feel like part of the virtual world. Bringing action close to the player in VR proved to be quite amusing. Sometimes this leads to funny surprises and further emphasizes the relationship between player and monsters throughout the game. This became one of the guidelines for the level design: the most rewarding moments should involve monsters acting close to the camera.
When designing mobile levels, we had to balance the moments and pacing of each level according to how many rare poses were used and how difficult it would be to frame them in proper time. Without the scoring system, a new approach was needed for the level design, since dares were now the central element of the game. It was then that we decided that every level should feel like they were telling a short story.
Having a clear vision of the tools and content helped to overcome the limitation of not having new animations for the VR version. That meant every time we'd come up with a new story for a level, we would be careful not to create something that would be impossible to communicate within the animation sets. Applying Kuleshov Effect, by employing a sequence of animations that would otherwise have different meanings, it was possible to overcome the animation shortage and allowed to tell the intended new stories. 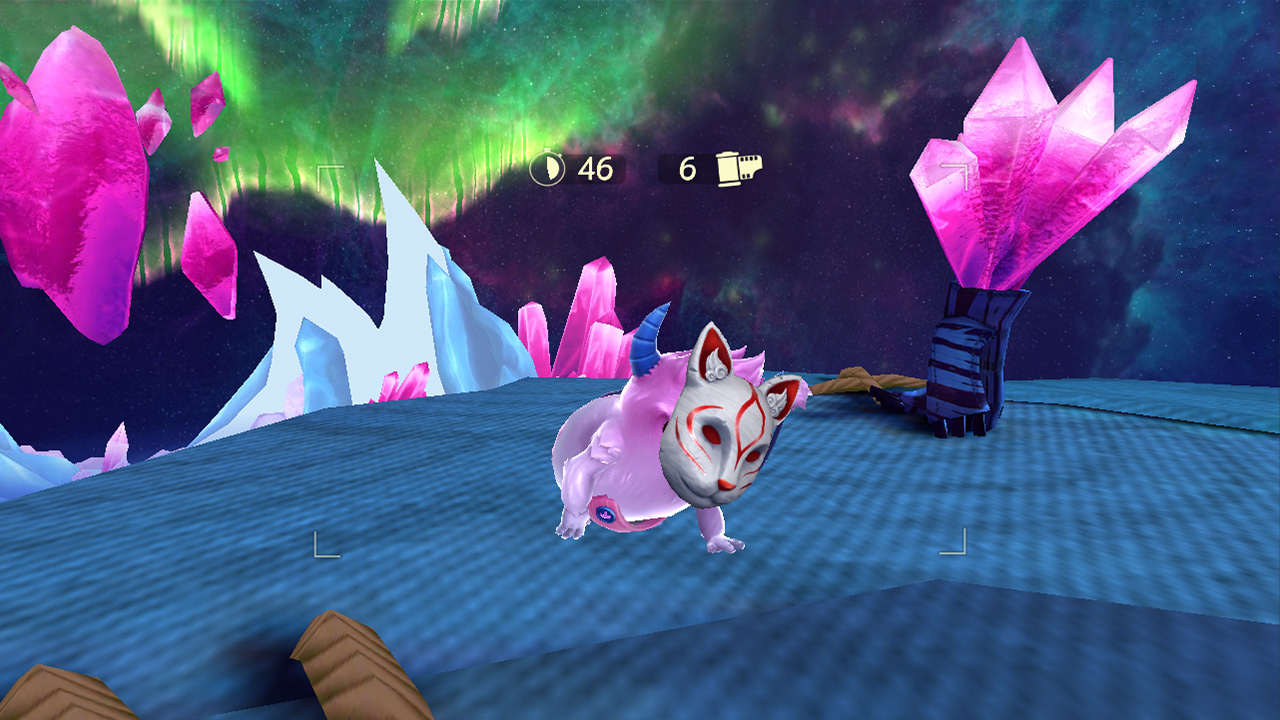 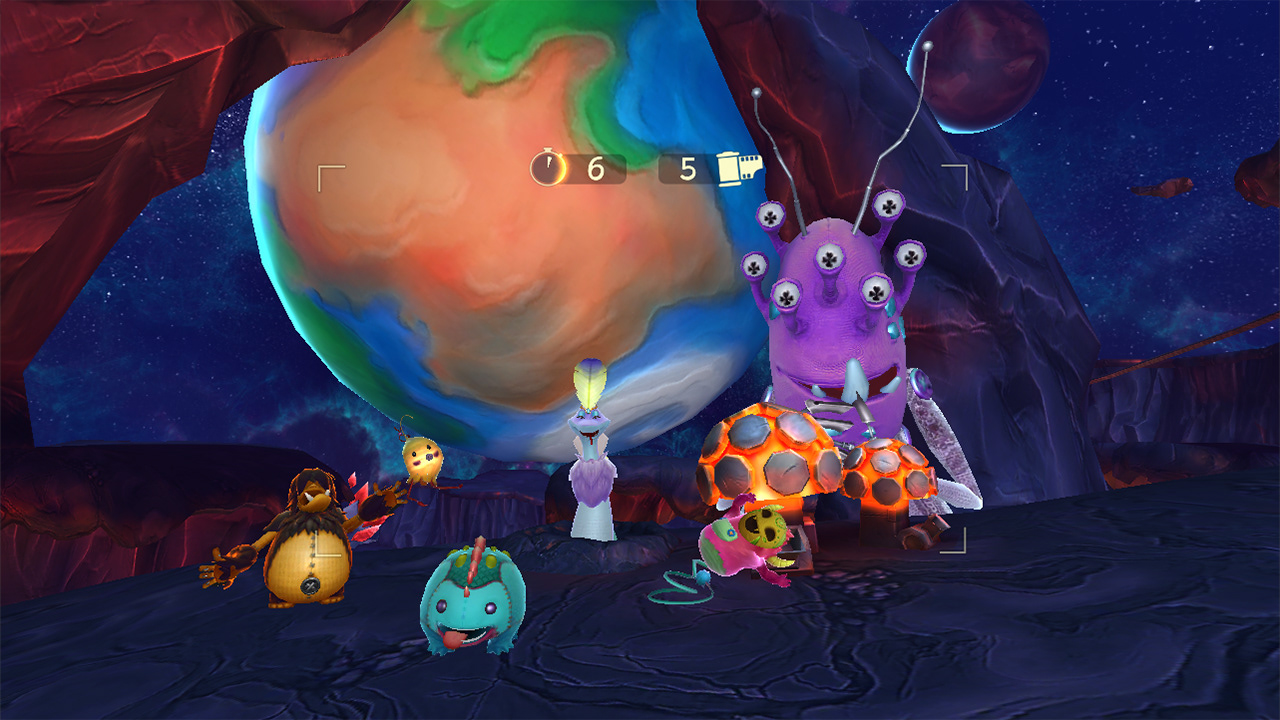 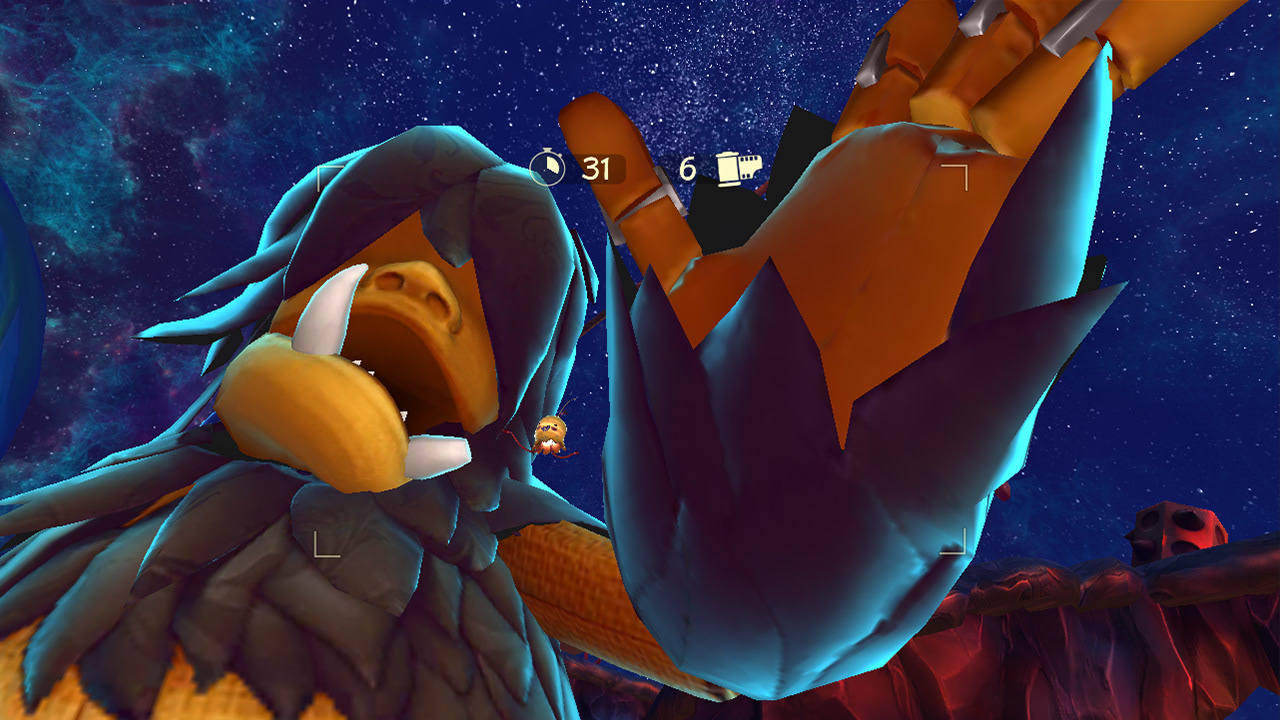 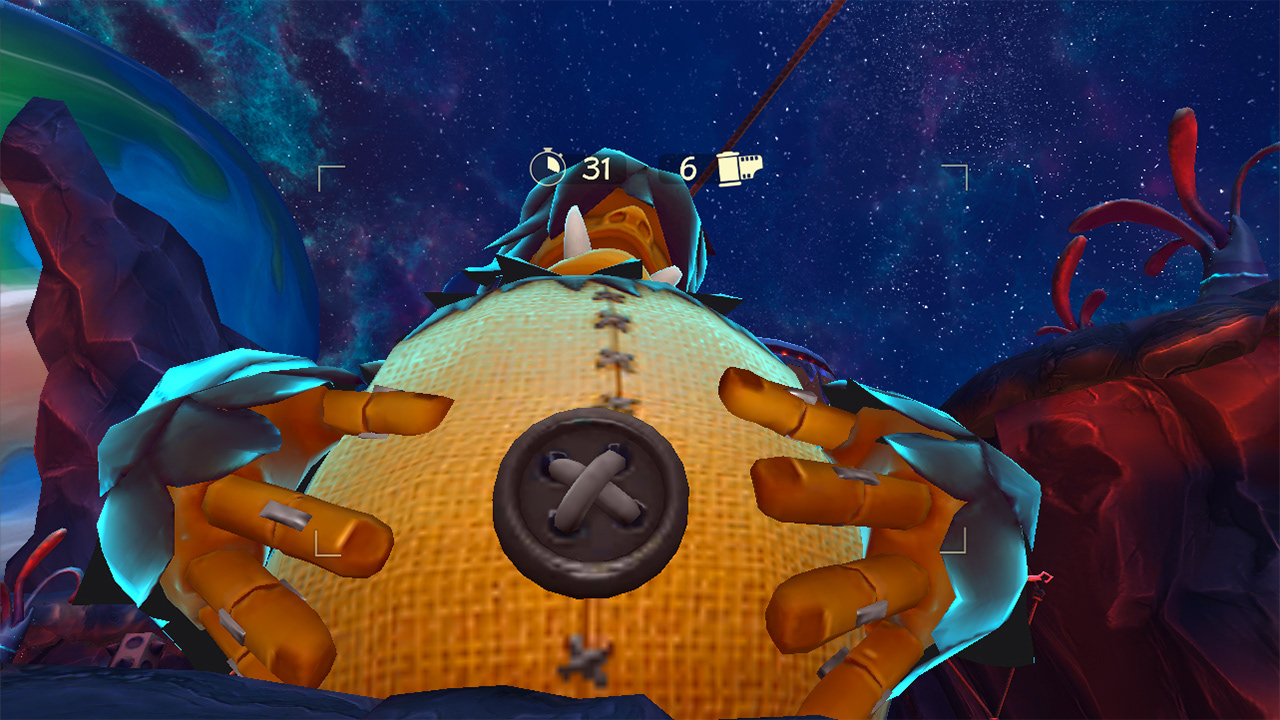