Qasir al-Wasat is an Arabian tale inside a wondrous palace, a stealth action-adventure set in an enigmatic 12th Century Syrian ruins. You play as a deadly, yet frail, invisible creature summoned from another world to complete an assassination mission.
My responsibilities as lead game designer were:
- Developing the game concept with the team.
- Researching to enrich game content.
- Designing core mechanics, systems and additional content to communicate the game concept.
- Documenting and keeping the internal wiki up to date with new iterations.
- Prototyping core mechanics and level design on Construct
- Prototyping game puzzles on paper.
- Planning the level design and building each room on Unity.
- Scripting game events, character behaviors and puzzles.
- Defining the soundscape concept with the sound designer.
- Leading the the QA process, internal and external, filtering feedbacks into action points.
Developed by: Aduge Studio, 2012
Platform: PC, Mac, Linux
Tech Environment: Unity, PlayMaker, Custom tools, SVN, Construct, Illustrator, Photoshop
Qasir al-Wasat received national and international recognition. The game was finalist at IndiCade 2012 on the Story and World Design category, and at BIG Festival 2012 on the Best Narrative and Brazilian Revelation categories, and at SBGames 2012 Qasir won the Best Technology award.

A strong characteristic of Aduge Studio was the design process based on thorough research. An example of that is how the main character of Qasir al-Wasat came to be. The game was set to be a stealth action adventure with an invisible creature as avatar, which inspired me to reasearch the lores of demonology.
That lead me to find the Ars Goetia from the Lesser Key of Solomon, with a long list of demons and their powers. Among many there was the king Balam, which granted invisibility to demons under their legion. The seal of Balam inspired our visual artist to make a seal of summoning for the protagonist demon, further iterating it to become a sigil of the contract between the summoning sorcerer and the invisible demon. This research was the stepping stone for the narrative designer to follow a more in-depth research to create the sorcerer and the djinn characters. 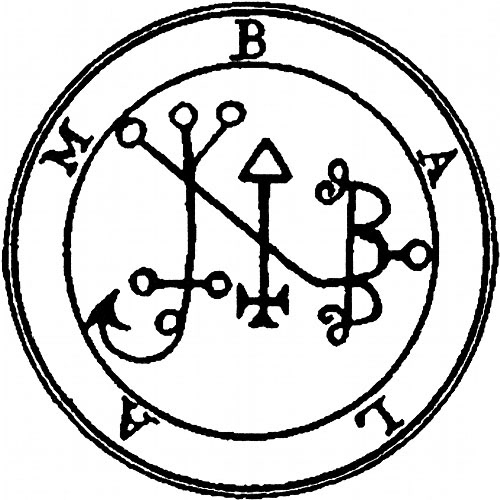 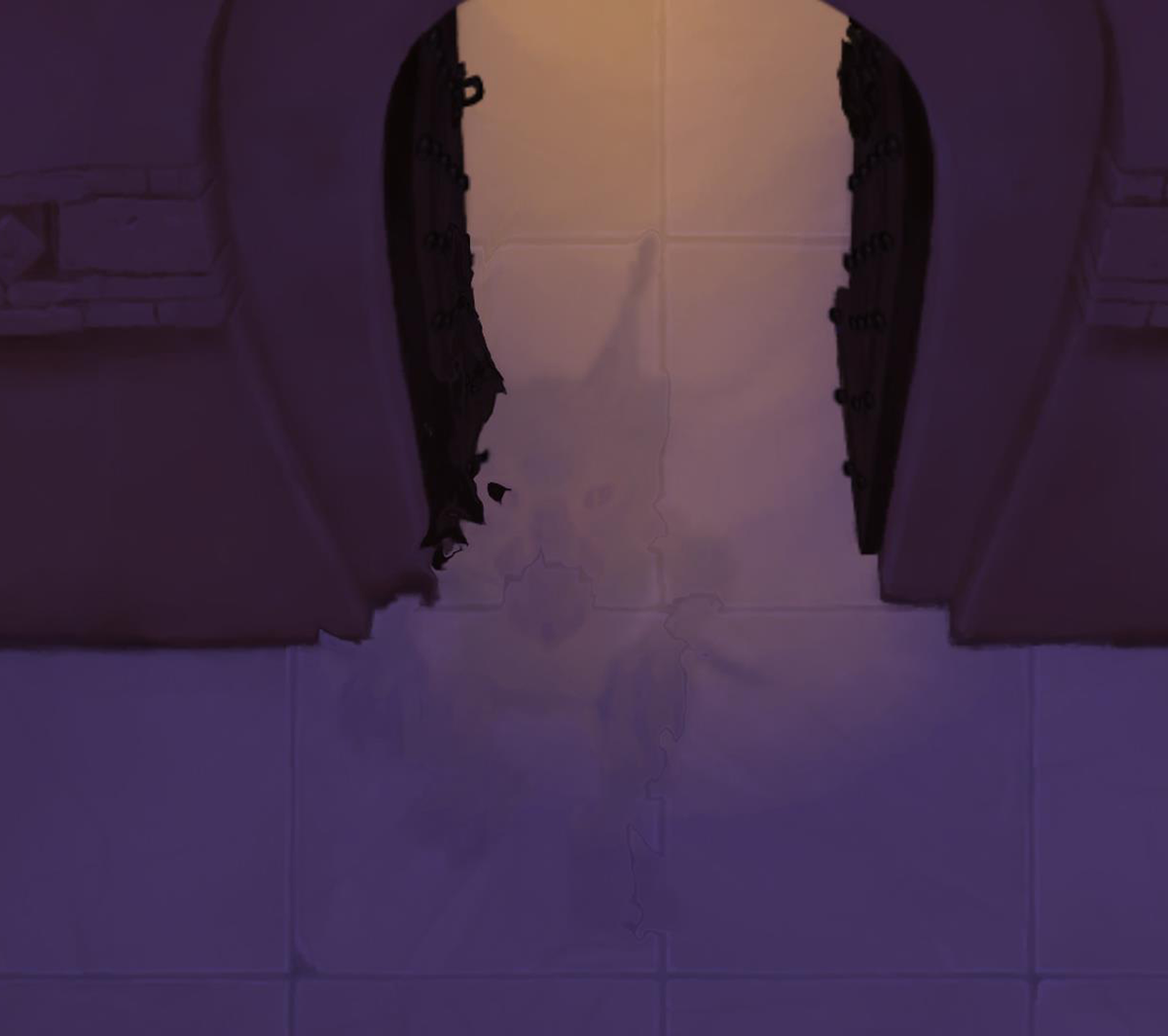 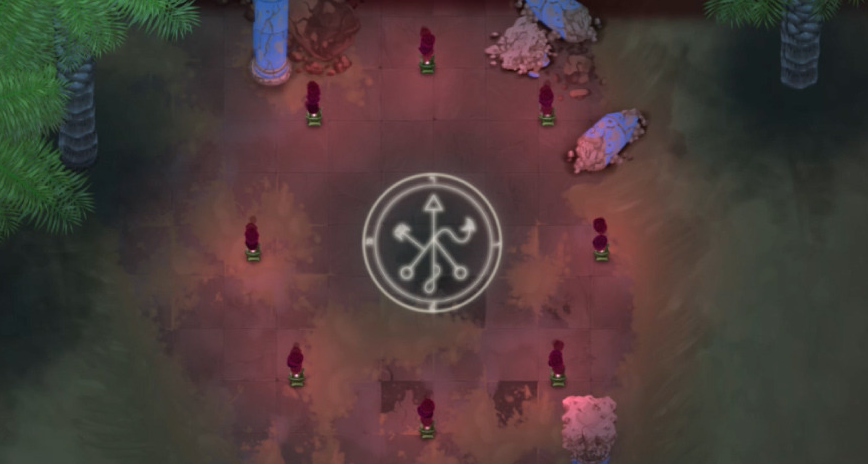 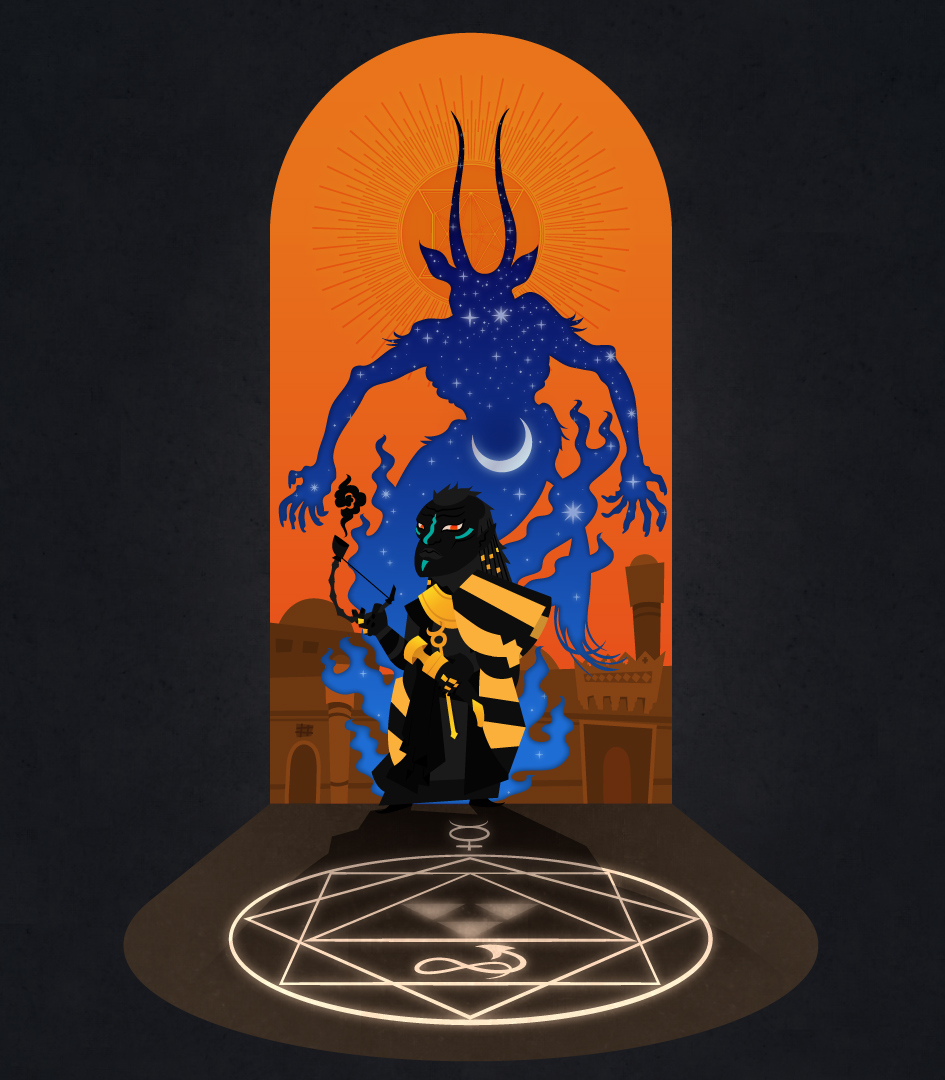 To provide players the experience of controlling a sneaky, deadly but frail creature, I defined a small set of core mechanics and rules comprised of being able to walk silently but slowly, a tear attack with the creature's claws and a poison sting. Both attacks kill enemies or NPCs instantly, likewise any hit from an enemy is enough to kill the player.
This proved to be a tough balancing challenge, given the fact that the protagonist controlled by the player is invisible. With that in mind I had to consider a series of things to provide an optimal experience. The first set of measures is related to the gameplay system and the second one related to level design.
Regarding the gameplay system, the tear attack is noisy and covers the creature in blood, progressively making it visible, whereas the poison sting is silent and leaves no trace, but has limited charges. To refill the poison the player must find infused date seeds. If the player happens to be covered in blood, it is possible to get clean by running on water, however this is extremely noisy and can be a tricky tradeoff in enemy populated rooms. Opening doors and activating levers also make noise, as well as carrying keys make the character visible. Enemies are aware of the invisible threat and will follow any noise and often perform random attacks when reaching the last emitted source. 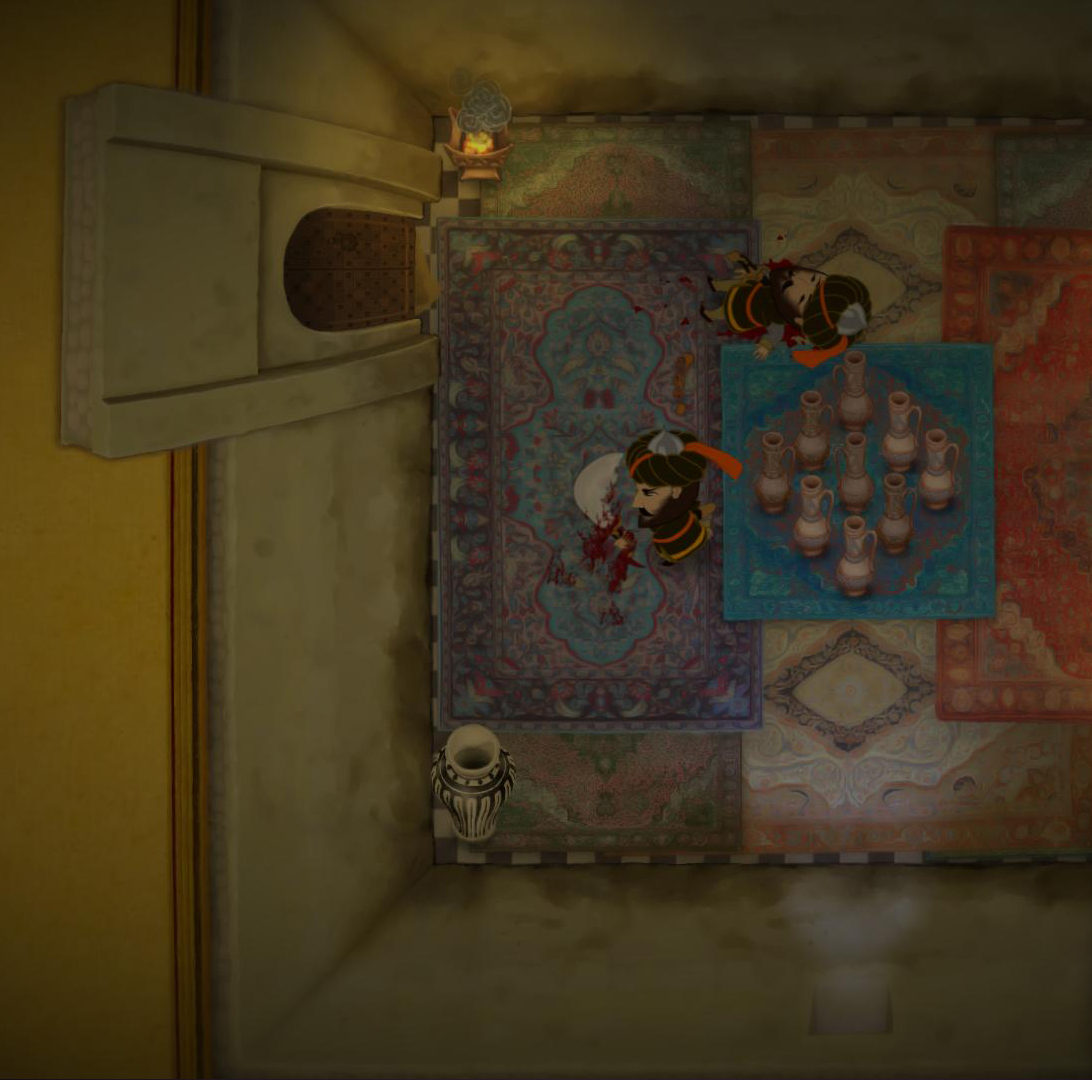 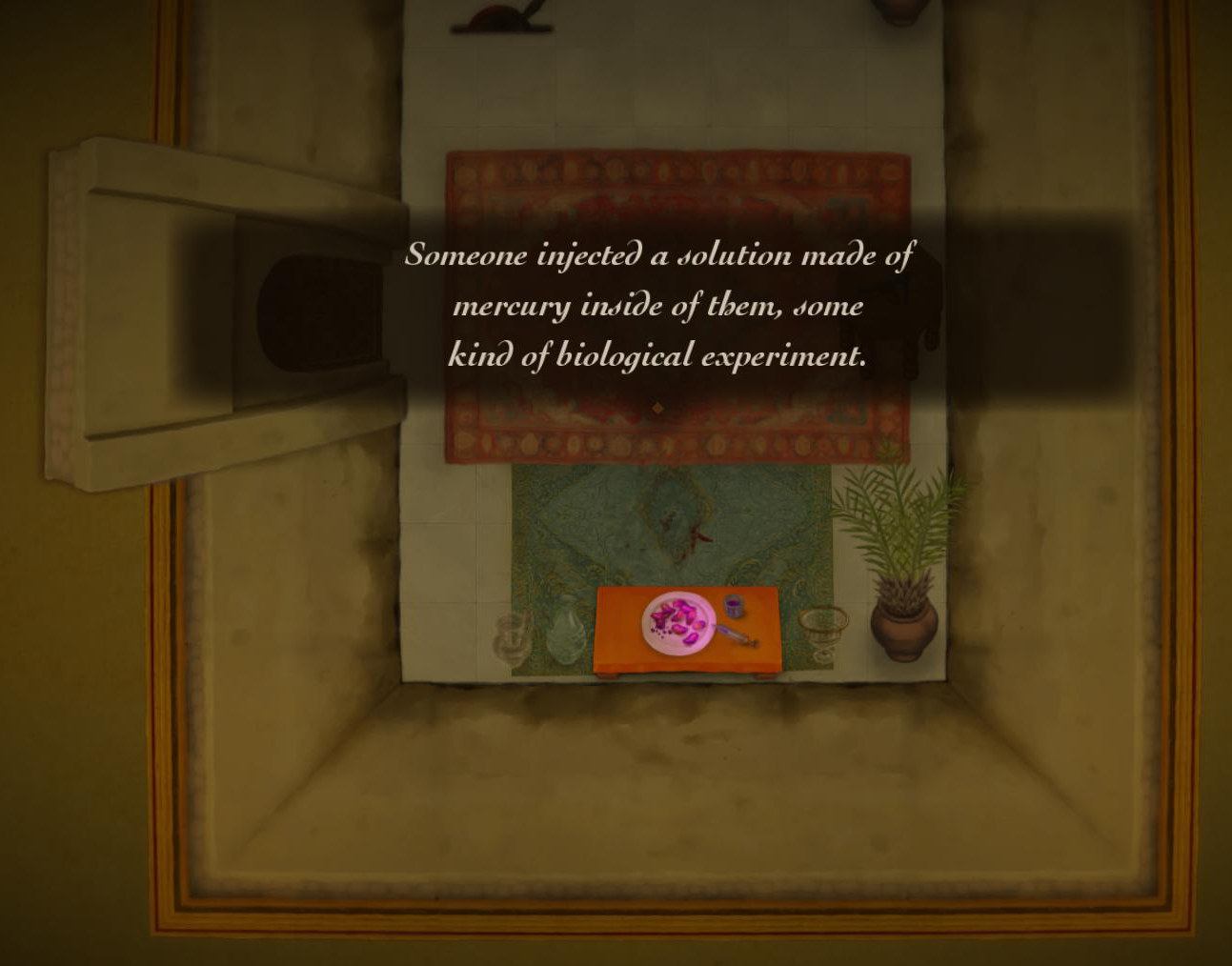 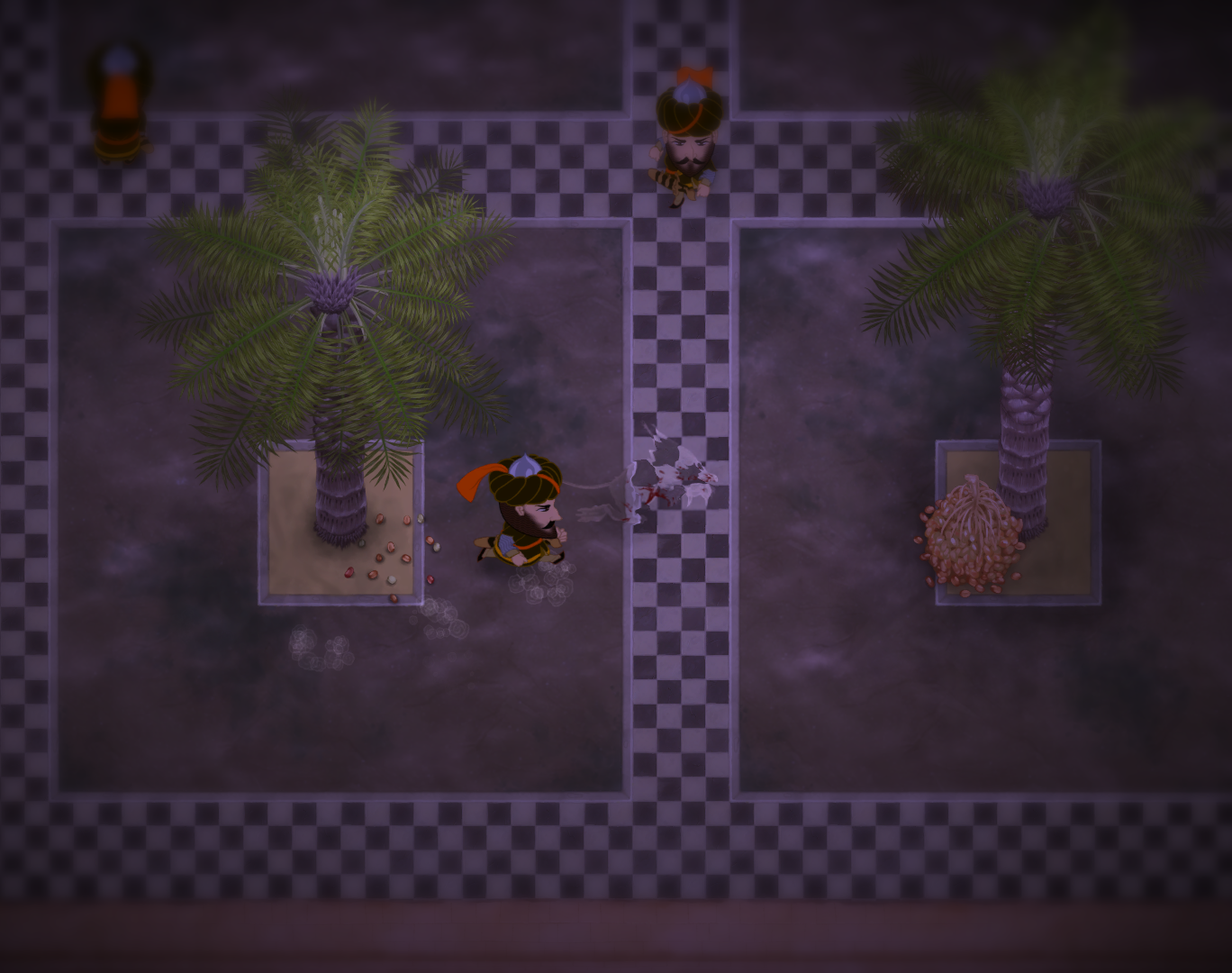 Regarding level design, I relied on a subtle layering. Depending on how the player decides to approach each room, different challenges can emerge.Players willing to embrace the stealth gameplay, not killing or being detected, face challenges that would be otherwise easy if they wouldn't mind killing. On the other hand, some rooms don't pose a threat when a player is clean and decide do avoid combat. For patient players, willing to gather the most information possible, some events triggered by NPCs can reveal curious facts and even open locked doors. This level design layering is backed up by the concept explored in the game, of a demon that does not operate by our human morals, hence the game does not enforce a specific way to play.
To ensure the gameplay and narrative were in harmony complementing each other, the creative director, the narrative designer and I worked together to critically analyze the affordances of the game, allowing me to adjust the pacing and making sure nothing was in conflict. 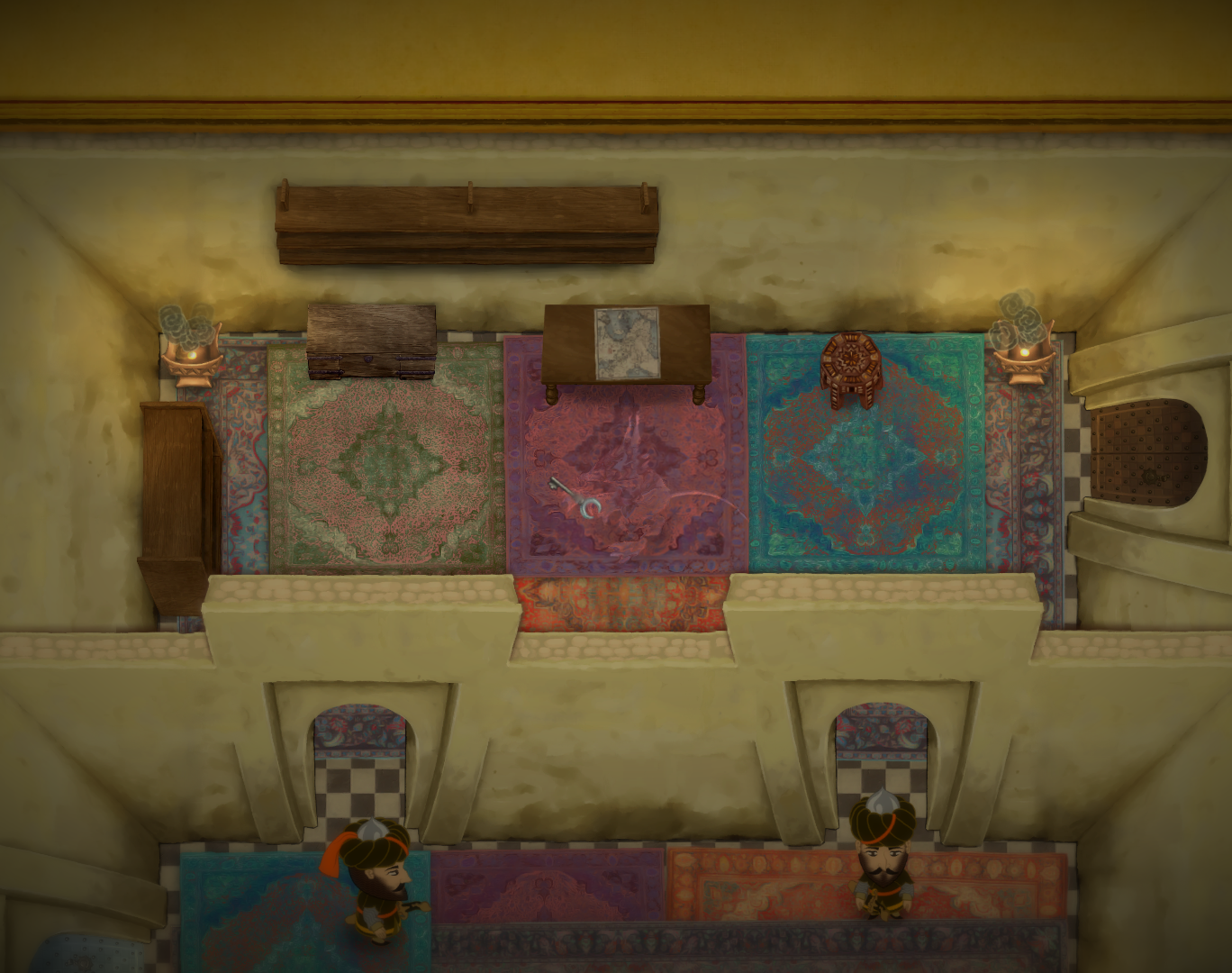 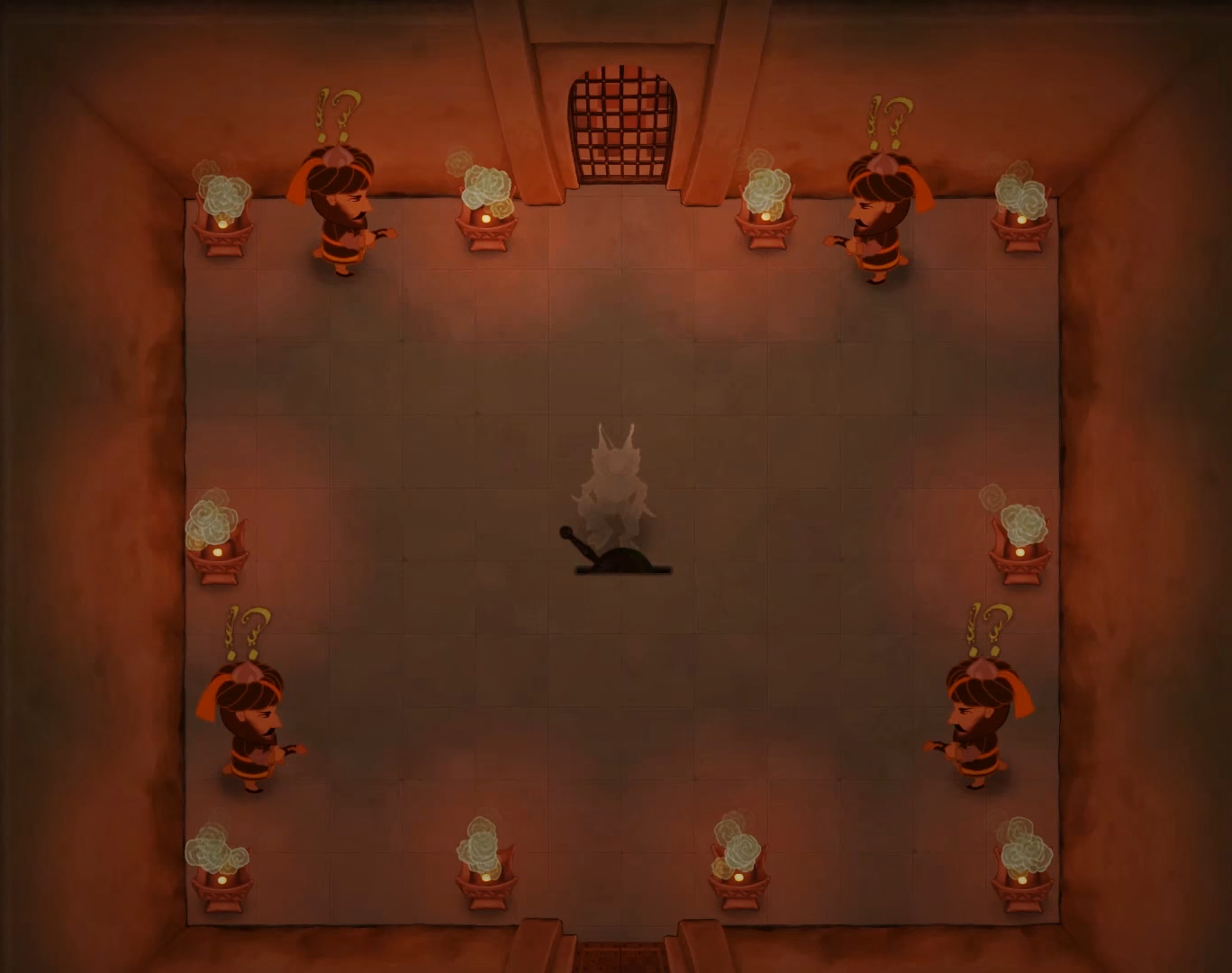 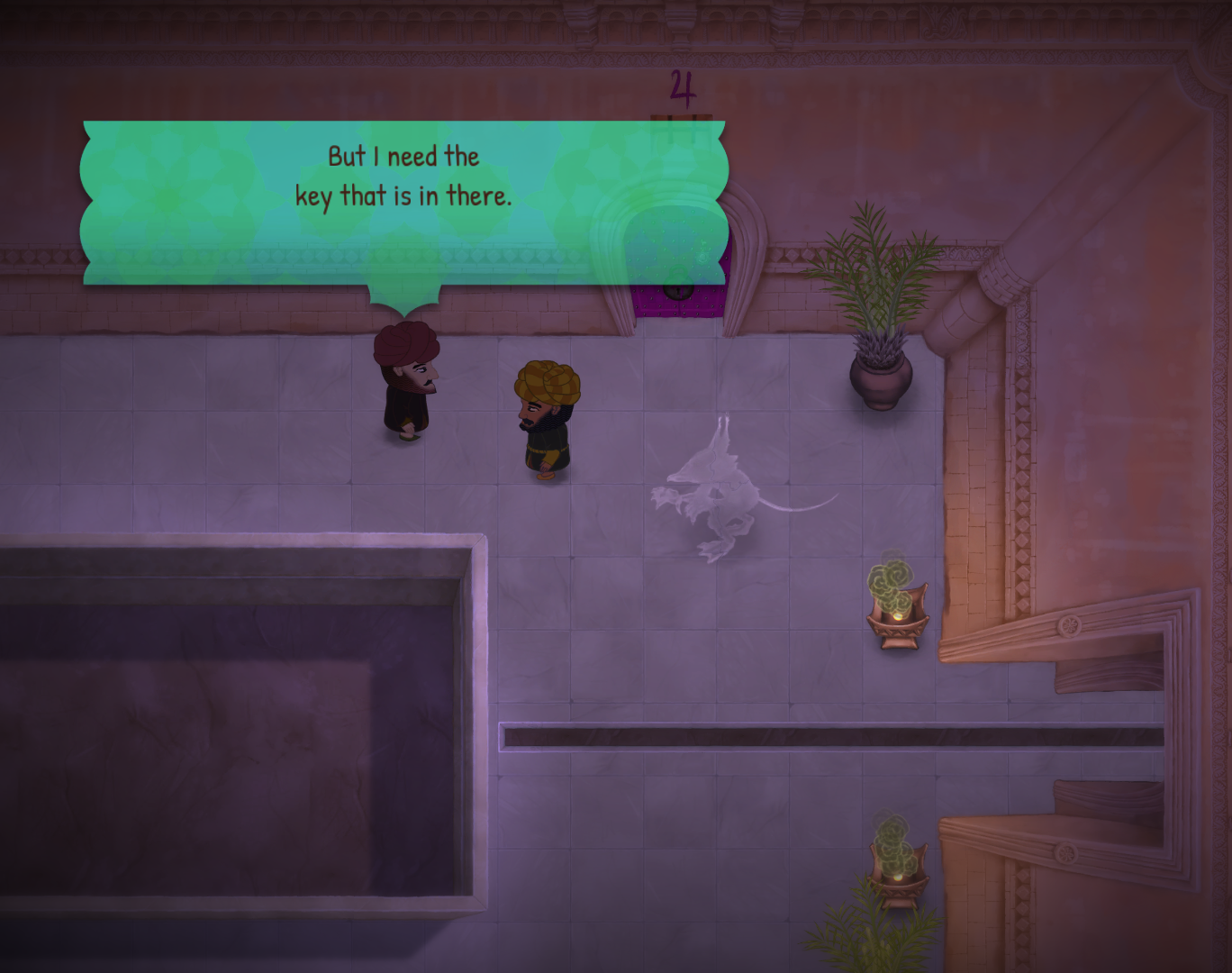 The game had the objective of being a historic fiction of a mystic palace in-between dimensions. For that reason, actual floor plans of ancient palaces in the region were the foundation of the level design. During that research I learned about the ruins of Qasr al-Hayr al-Sharqi (The Palace of the East) and Qasr al-Hayr al-Gharbi (The Palace of the West). Between the two was a strategic location for our fictive palace to be placed. Qasir al-Wasat literally means The Palace in the Middle, adding another layer of meaning to the game.
From the floor plans I could analyze the way rooms and patios were structured and adapt it in a way that would fit the game needs. Those adaptations allowed to develop a series of unique rooms to serve moment to moment gameplay and foster open ended narrative, also serving to develop intricate content for the game. 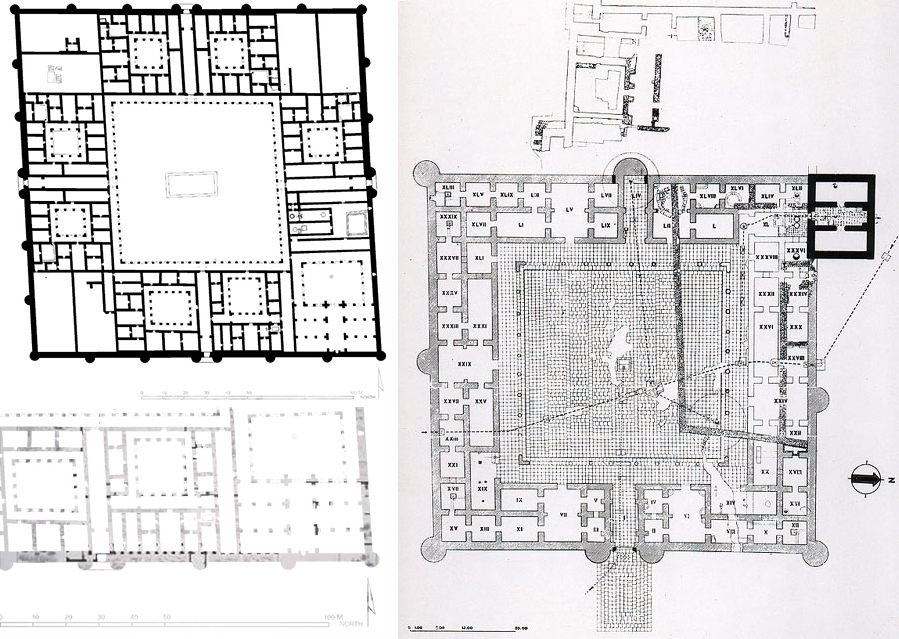 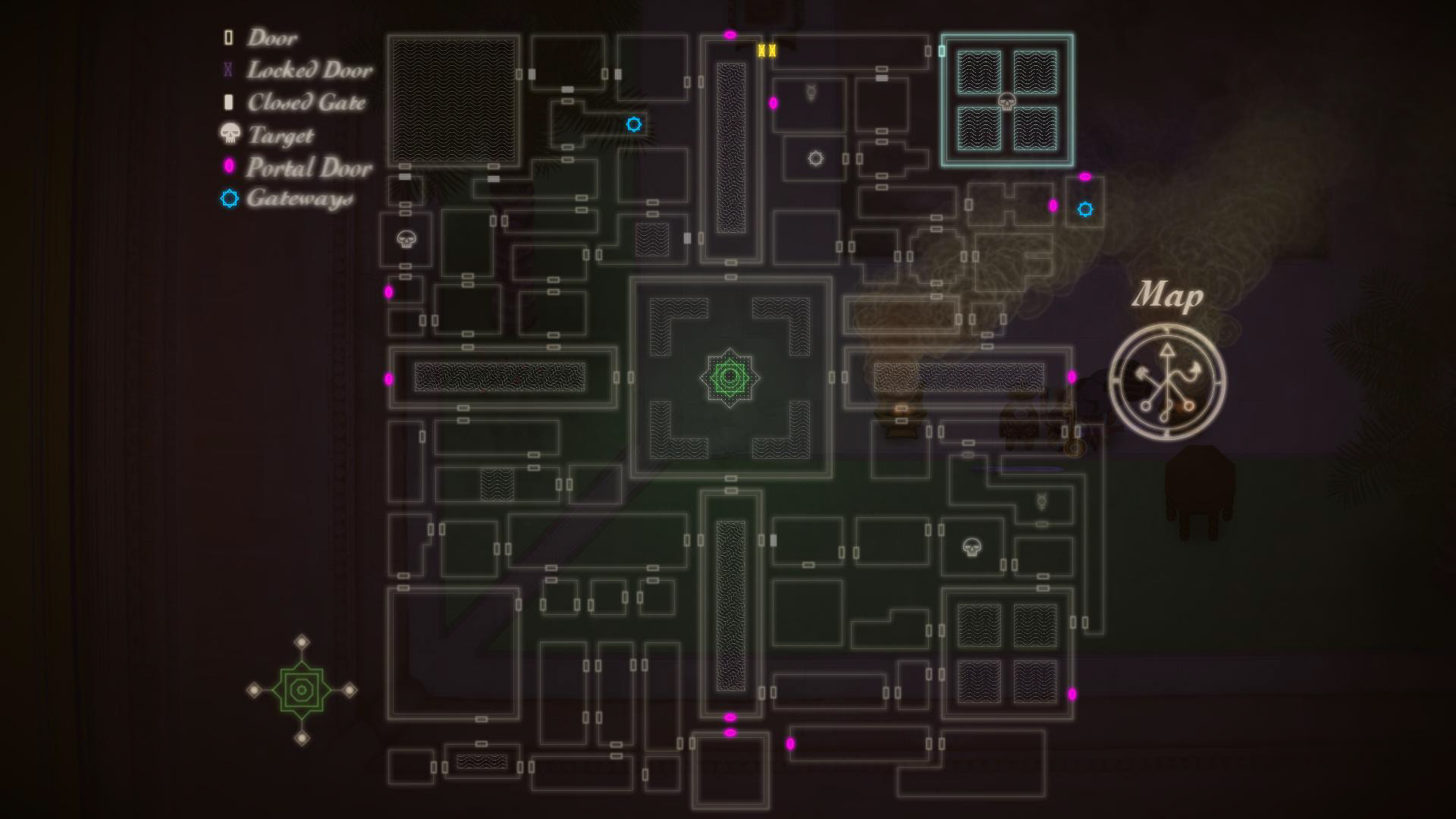